Research Study Leads to U.S. Food and Drug Administration Approval of a Game-Changing Therapy for Young Patients with High-Risk Leukemia 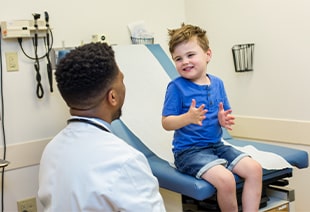 Clinical trials at Cincinnati Children’s are leading to FDA approval of promising new therapies for children and young adults with high-risk leukemia who have failed multiple courses of chemotherapy. One exciting area of research is in the use of Vyxeos (CPX-351), an engineered anti-cancer nanoparticle delivery system of daunorubicin and cytarabine.

The first in pediatric phase I study of Vyxeos in 2018 at Cincinnati Children’s established the recommended pediatric dose and the spectrum of side effects for patients with high-risk leukemia. The Vyxeos nanoparticle bypassed usual drug-resistant mechanisms to attack the cancer cells. Almost half of participants achieved a favorable response with elimination of leukemia from their bone marrows. These same patients had failed previous therapies — including intensive chemotherapies and bone marrow transplant.

“Vyxeos nanoparticles behave differently than either daunorubicin or cytarabine administered individually. The liposomal structure allows the drugs to spend more time in the blood and targets myeloid leukemia cells in the bone marrow. The liposomes enter cancer cells differently, and may overcome drug resistance mechanisms,” says John Perentesis, MD, FAAP, director of the Division of Oncology at Cincinnati Children’s. “A response rate of almost 50% is impressive since these patients had no other path to remission.”

In May 2020, the Children’s Oncology Group published results from a phase II trial that confirmed the toxicities and response rate seen in the Cincinnati Children’s study. Less than a year later, in March 2021, the U.S. Food and Drug Administration (FDA) approved a revised label for the drug to include a new pediatric indication. Now, Vyxeos is approved to treat newly diagnosed therapy-related acute myeloid leukemia (AML) and AML with myelodysplasia-related changes in children aged 1 year and older. 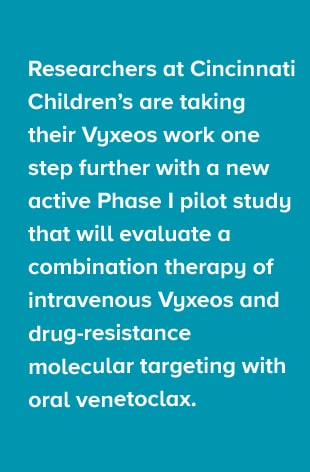 Researchers at Cincinnati Children’s are taking the Vyxeos work one step further with a still-active Phase I pilot study that will evaluate a combination therapy of intravenous Vyxeos and oral venetoclax.

Venetoclax is a small molecule inhibitor FDA approved for adult cancer treatment but is relatively new in research involving children. Cincinnati Children’s oncologists first used it in 2018 when a patient in the first Vyxeos study had residual AML following treatment. Hoping to learn more, they performed single-cell RNA sequencing on samples of blood taken immediately before Vyxeos therapy and on days three and five of treatment.

An analysis of the effects of Vyxeos treatment on leukemia cell populations in the patient showed a high RNA signature of BCL2-proteins that play a role in deciding whether the cell survives or dies. Cancer cells use BCL2 to “stay alive” after incurring damage from chemotherapy. This work suggested that BCL2 was a resistance mechanism in some of the patients who do not respond fully to Vyxeos. Since venetoclax is a BCL2 inhibitor, the care team thought the drug might tip the balance toward leukemia cell death. Work in Cincinnati Children’s oncology laboratories then showed that venetoclax was synergistic in killing aggressive leukemia cells in the test tube when combined with the daunorubicin and cytarabine chemotherapy in Vyxeos.

The patient received a second course of Vyxeos therapy, but this time with venetoclax. Afterward, the patient had no detectable leukemia. He then had a second, successful bone marrow transplant and is doing well three years later.

What’s Next: Clinical Trial of Vyxeos and Drug-Resistance Molecular Targeting with Venetoclax

Patients in the current pilot study include children and young adults (age 1-39) who have refractory or relapsed acute leukemia. They receive Vyxeos on days one, three and five at the FDA-approved dose and take venetoclax daily. This study, the first of its kind in the U.S., is only available at Cincinnati Children’s.