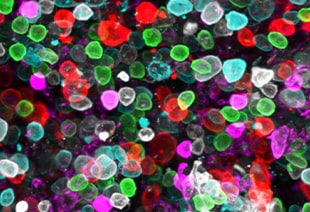 Imagine a day when clinicians treating people with blood diseases such as leukemia or multiple myeloma can send in requests for laboratories to custom-produce specific types of blood cells to replace those affected by the disease.

That day became one step closer to reality with a new study led by experts at Cincinnati Children’s that provides powerful new insights into how bone marrow tissue works.

The study, published in Nature, was led by senior author Daniel Lucas, PhD, and first authors Jizhou Zhang, MD, and Qingqing Wu, PhD, from the Division of Experimental Hematology and Cancer Biology. Co-authors include scientists from Cincinnati Children’s and the University of Cincinnati, plus collaborators in Colorado, Texas and Michigan. 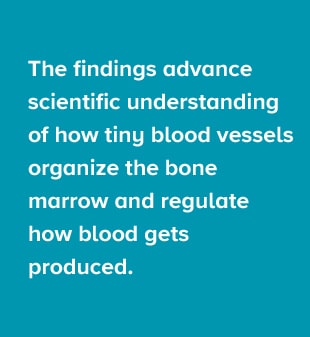 The team used a combination of cell-by-cell analysis techniques to build “maps” of bone marrow tissue. The findings advance the scientific understanding of how tiny blood vessels organize the bone marrow and regulate blood production.

“For the first time, we can see how blood cells are being produced in situ and visualize bone marrow cell differentiation in the context of healthy and diseased tissue,” says Lucas. “This technique helps us understand the bone marrow architecture and structures needed to produce blood cells.”

“If we determine how the vessels function, we will be one step closer to controlling the production of specific blood cells at will,” Lucas continues. “This finding could help us discover the Holy Grail of hematology, which is to produce blood products without human blood donors.”

How Can This Discovery Advance Care?

One potential direction for this line of study could be to support the future development of highly customized blood cell organoids that would mimic bone marrow function in laboratory settings. 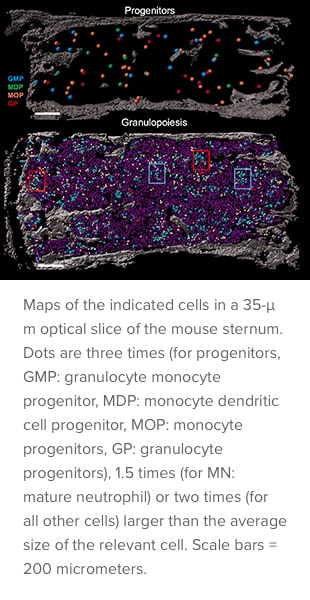 Such blood organoids could be used to produce populations of blood cells with specific genetic variations, which scientists could analyze to develop improved treatments for disease. Eventually, blood organoids might become a form of therapy themselves by allowing clinicians to replace a patient’s diseased cells with gene-edited healthy cells that face no risk of rejection.

Until now, tracing the lineage of cell types during stages of development required destroying the spatial organization of the tissue. In this project, the team developed novel confocal imaging methods for unprecedented resolution of blood cells in the marrow. This allowed them to image and trace unique progenitors within the larger mass of bone marrow cells — without destroying the tissue structure.

More study is needed to identify the molecular signals produced by the different blood vessels that regulate the production of each type of blood cell. Knowing those signals will be a crucial step to regulating blood cell production at will.

“We want to be able to visualize every step in the production of the different types of blood cells,” Lucas says.