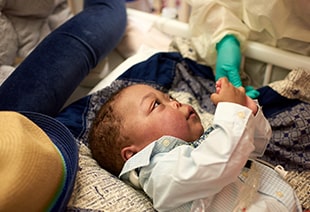 Ashish Kumar, MD, PhD, was optimistic about the protocol he developed in 2016 for Langerhans cell histiocytosis (LCH) and other histiocytic disorders. But even he could not have predicted a 100% treatment response rate. Kumar, co-director of the Histiocytosis Center at Cincinnati Children's, has used the protocol on more than 50 patients with no incidence of disease recurrence. Here he talks about his team's experience and plans for a clinical study.

Tell us about this new protocol.

We are using the kinase prohibitor trametinib to target the gene mutations that cause LCH. Children with LCH respond to it so spectacularly that we started offering trametinib as first-line therapy in 2018. We initially used dabrafenib in patients whose LCH carried the BRAF-V600E mutation, but since trametinib works in all mutations, we have switched to using trametinib in all patients.

How does this therapy differ from the standard of care?

The standard of care for newly diagnosed and relapsed or recurrent LCH is chemotherapy. Unfortunately, in 15-20% of patients, the disease does not respond to chemo at all. Even when chemo works, the relapse rate at the one-year mark is as high as 40%. We cannot predict upfront who will experience disease progression or relapse. Sometimes, recurrence can have permanent, life-changing consequences since LCH can cause irreversible damage to the liver and pituitary gland.

Contrast chemotherapy with our protocol of oral trametinib, a drug that has undergone early phase clinical trials in children with brain tumors and LCH. Rashes and fever are known side effects, but these are easily managed. Unlike chemotherapy, trametinib requires no central intravenous line and is not associated with immune suppression or chemotherapy's many other side effects. And, thus far, it always works.

With all this in mind, I cannot justify putting a child through chemo when I have something that I know is at least equally effective and often more effective.

Are other pediatric cancer centers adopting this approach? 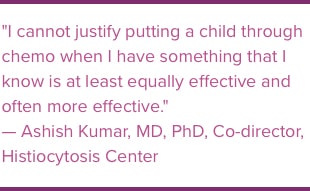 Adoption has been slow. Pediatric oncologists are more comfortable offering experimental therapies in the context of a clinical trial. Generally speaking, I agree with this approach in treating cancer, where the biology of the disease is so complex and the mutations are not well-understood. But LCH is different — it isn't cancer, and we understand its biology and the associated mutations quite well. I hope that other practitioners will step outside their comfort zone and begin using targeted therapies like tremetinib to treat LCH. I would be happy to consult with any oncologist who wishes to do so in their own practice. As it is, patients are traveling to Cincinnati Children’s from as far away as England for the treatment.

Where do your clinical research efforts stand?

We hope to start a clinical trial in 2022 to study the safety and efficacy of a kinase inhibitor as first-line therapy for LCH. It will be open to anyone with a histiocytic disorder. including those whose disease has recurred after chemotherapy.

Also, we continue to learn about LCH in the lab. Our team performs molecular testing on every patient with LCH or histiocytic disease to identify the specific gene mutation responsible for the disease. Last year, our team discovered three novel gene mutations associated with these diseases. We recently launched a sensitive blood test to assess the presence of minimal residual disease in patients with BRAF-V600E-associated histiocytosis. This test is called HistioTrak and was developed by Somak Roy, MD, a molecular pathologist at Cincinnati Children’s, in collaboration with Jennifer Picarsic, MD. Dr. Picarsic is the Histiocytosis Center's co-director and a world-renowned pathologist in histiocytic disorders.

One step closer to understanding how blood gets made.