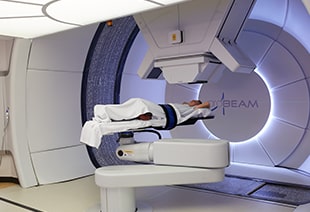 Researchers at Cincinnati Children’s are the first in the world to investigate novel applications of Flash therapy, which delivers proton radiation up to 1,000 times faster than what is used clinically today. The goal is to someday cure cancers such as diffuse intrinsic pontine glioma (DIPG), glioblastoma and relapsed sarcomas.

John Perentesis MD, FAAP, director of the Division of Oncology, talks about this promising technology and its potential impact on cancer treatment.

Flash is one of the hottest areas in oncology research right now. Why is that?

Perentesis: Almost half of the people in the United States who receive treatment for their cancer have radiation therapy, so it’s a priority area for research. Initial data indicate that Flash causes significantly fewer side effects than conventional radiation therapy and is just as effective in killing cancer. We believe it may be superior to conventional proton therapy in terms of sparing healthy tissue.

How would you characterize Flash research at Cincinnati Children’s? 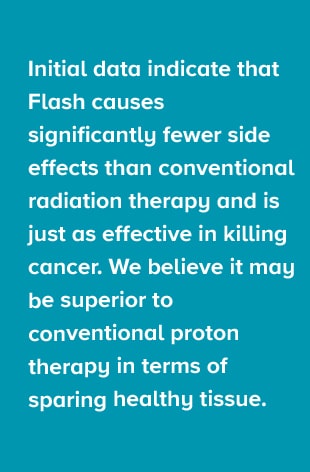 Our $3.6 million basic research program focuses on increasing treatment efficacy and reducing side effects for brain tumors, lung cancer, sarcomas, and cancers of the head and neck. We also are establishing Flash biomarkers and immunological data points.

Cincinnati Children’s is a founding member of FlashForward, a consortium of academic centers working together to advance the science. Many of our experts will be speaking at national and international meetings this year, including the American Society for Radiation Oncology meeting in Chicago and FRPT 2021 in Vienna, Austria. FRPT 2021 will be the first multidisciplinary forum to showcase the latest research on Flash and particle therapy.

Why is Cincinnati Children’s able to engage so deeply in Flash research?

Perentesis: Cincinnati Children’s and the University of Cincinnati Medical Center opened a Proton Therapy Center in 2016. Today, it’s one of only about 90 proton therapy centers in the world and the only one with a dedicated research gantry that has special capabilities to deliver ultra-fast Flash doses.

Without a dedicated gantry, you’re pretty limited in what you can do with Flash research. Most places either have a room at the end of a beamline that doesn’t accurately simulate the clinical setting, or research has to happen after-hours in a space designed for patient care. Our 300-ton research gantry is identical to our two patient gantries and has special monitoring equipment to detect Flash doses. It allows us to do clinical simulations and engage in next-step research by treating patients enrolled in our clinical study.

In addition to the research gantry, the Proton Therapy Center has a rodent facility and a small lab. All of these resources are allowing us to leap forward with Flash research.

What are the focus areas for your team’s basic research efforts?

We’re interested in learning more about how Flash modifies the anti-tumor immune response in cancer patients. Brian Turpin, DO, and Ralph Vatner, MD, PhD, are wrapping up a study investigating a novel combination of pembrolizumab with decitabine and proton and photon radiation therapy (not Flash) in the treatment of aggressive childhood cancers. This is the first clinical trial incorporating proton therapy in some patients for stimulating the immune system. And it’s the first trial combining proton therapy with checkpoint inhibitor immunotherapy. A similar protocol could be used later on to use Flash with these immunotherapy drugs.

Collaboration across multiple divisions at Cincinnati Children’s is accelerating Flash research. We’re fortunate to have an Animal Behavior Core, which is co-directed by Charles Vorhees, PhD, and Michael Williams, PhD. Over the years, they have developed very sophisticated rat models of behavior, which allows them to study the effect of Flash on neurocognition.

Flash research is gaining momentum at Cincinnati Children’s, and we anticipate that many of our basic research studies will lead to clinical trials.

Learn more about the Proton Therapy Center at Cincinnati Children’s.