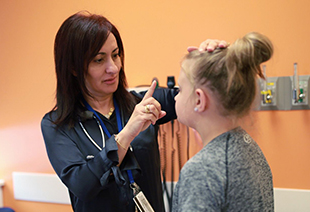 Four years ago, researchers at Cincinnati Children’s published a study that cast doubt on the effectiveness of medication to treat migraine in young people. Today they are continuing to discover new preventive and therapeutic strategies for this debilitating condition.

Results from the 2017 Childhood and Adolescent Migraine Prevention (CHAMP) study, published in The New England Journal of Medicine, came as a surprise to many in the field. The key finding: amitriptyline and topiramate, the two most commonly prescribed medications for preventing migraine in teens were as effective as placebo in preventing migraine – they all appeared to work equally. The study tracked more than 300 patients at 31 centers across 24 weeks.

In July 2021, experts at Cincinnati Children’s and the University of Iowa published a three-year follow-up study to CHAMP. The new study reports that CHAMP participants maintained the improvements they gained from treatments received even after they stopped taking the medications or the placebo.

The Future of Migraine Treatment

The CBT study was a pilot led by Scott Powers, PhD, co-director of the Headache Center at Cincinnati Children’s, and Robert Coghill, PhD. It found that after CBT, teens exhibited changes in brain structure, as measured by functional MRI. 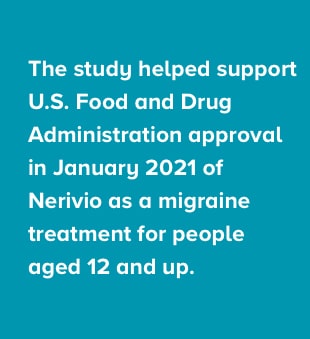 “The study was relatively small, but 83% of participants showed improvements in headache days, and these changes were related to these brain biomarkers,” Powers says.

The pilot study received the 2020 Members’ Choice Award from the American Headache Society. Cincinnati Children’s will be using funds from two National Institutes of Health grants (valued at a combined $6.15 million) to build on this research.

The second study, published online in December 2020 in Headache, reports positive results from teens using a wearable device called Nerivio that delivers “remote electrical neuromodulation” once a headache starts. In essence, the signal interrupts the development and progression of an attack of migraine.

Andrew Hershey, MD, PhD, endowed chair and director, Division of Neurology, was the study’s principal investigator. Findings from this study helped support U.S. Food and Drug Administration approval in January 2021 of Nerivio as a migraine treatment for people aged 12 and up.

A Look at What’s Next

Experts from the Headache Center are evaluating an emerging class of migraine medications for potential use in children and teens, including monoclonal antibodies that target the CGRP (calcitonin gene-related peptide) receptor and other medications that directly inhibit CGRP.

“More than 6 million youth in the U.S. suffer from migraine, which is associated with poorer performance and absence from school and social activities during a particularly formative time in life,” says Hershey. “We are determined to provide teens with more effective and engaging treatments that will have far-reaching, positive effects over the course of their lives.”

Targeting seizures that start deep in the brain with responsive neurostimulation.