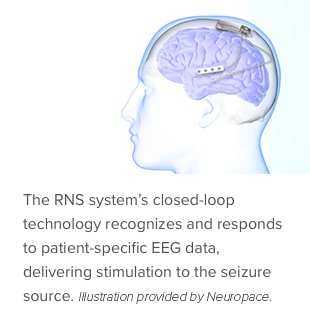 A small number of pediatric hospitals around the country are using responsive neurostimulation (RNS) off-label to treat kids with drug-refractory seizures for whom resection or ablation surgery is not a safe option. Epilepsy specialists at Cincinnati Children’s began doing so in 2019, using depth electrodes to target seizure foci in deep and/or folded areas of brain tissue. If successful, it could suggest that RNS has the potential to benefit children with a wide variety of epilepsy types.

The closed-loop feedback system includes a neurostimulator generator placed in the skull that is connected to electrodes positioned in areas of seizure focus. When the generator detects abnormal electrical activity in the brain, it responds within milliseconds by giving small pulses of electrical stimulation to normalize brain activity before the individual experiences seizures.

“Unlike other brain stimulation systems, RNS is a “smart” device that records the electroencephalography data,” says pediatric epileptologist Hans Greiner, MD, co-director of the Epilepsy Surgery Program. “The patient uploads this data to the cloud for the epilepsy team to review. We can adjust the RNS settings to personalize and optimize therapy.”

The U.S. Food and Drug Administration approved the RNS System in 2014 for adults with refractory, focal onset seizures with no more than two epileptogenic foci. Follow-up studies in the adult population show that the benefits increase over time. In adults, on average, seizures decreased by about 50% after two years of RNS therapy. After seven years, seizure frequency was reduced by half in two out of three people. Almost 25% of patients were seizure-free at their last follow-up.

The epilepsy team at Cincinnati Children’s is seeing a similarly positive response to RNS therapy in children and young adults. For example, the first patient to undergo implant surgery was experiencing two types of seizures. One was motor seizures with jerking of all extremities twice a week – reduced to twice a month with RNS. The other seizures occurred multiple times a day and created a sensation of gut abnormality; these have ceased with RNS. 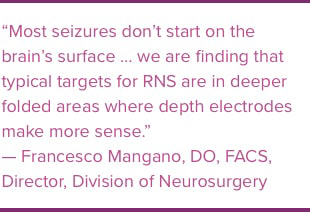 “Seizures may start superficially or deep, and may include eloquent regions of the brain. RNS allows us to target all these regions with confidence,” says pediatric neurosurgeon Francesco Mangano, DO, FACS, director of the Division of Neurosurgery. “The RNS generator accepts a total of eight inputs from two different electrode sources, so we can place a four-channel electrode strip on the surface of the brain and then use burr holes to implant one or more depth electrodes in different locations.”

RNS data amounts to a treasure trove of information that could lead to better outcomes for children with drug-resistant epilepsy. “A very interested group of neurophysiologists led by my colleague Dr. Ravindra Arya is diving into the data to discover better therapies than currently exist for pediatric patients,” Greiner says. “We are learning and sharing what we learn with other pediatric centers who are exploring this technology’s potential. These are early days, but we are encouraged by what we see in this therapy so far.”

New technique could one day lead to better care for people on mechanical ventilators.