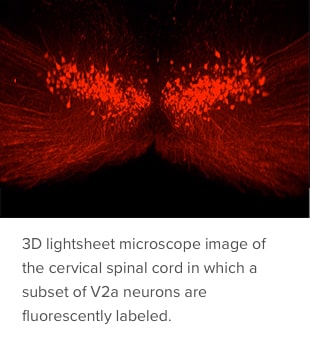 Ventilator dependence after a spinal cord injury (SCI) can have a devastating effect on a person’s life expectancy and quality of life. Neuroscientist Steven Crone, PhD, has dedicated his career to helping such individuals through his research at Cincinnati Children’s. Along with other neuroscientists in the Crone Lab, he studies what happens to breathing circuits after SCI, amyotrophic lateral sclerosis (ALS) and epilepsy. Specifically, his work focuses on understanding the role spinal neurons may play in promoting recovery and restoring natural ventilation in animal models of SCI and neuromuscular disease.

Crone and a group of researchers from several other institutions recently published a study describing an imaging technique that is opening new avenues to study SCI. Here he describes the technique and some of its applications.

How would you describe this new way of imaging animal model spinal cords? 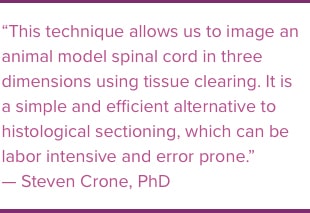 Crone: This technique allows us to image an animal model spinal cord in three dimensions using tissue clearing. It is a simple and efficient alternative to histological sectioning, which can be labor intensive and error prone. Tissue clearing has been around for about 100 years or so and has become more popular in the last decade due to the development of new methods that work well with fluorescent molecules and modern microscopes.

The method we developed is a refinement that allows the technique to work well with injured cords, which typically did not clear well using previous methods. It gently clears lipids and other opaque structures from the intact and injured spinal cord, making it transparent. Researchers can then use multiple fluorescent labels and a light sheet microscope to assess molecularly defined neuronal populations, acute inflammation, long-term tissue damage and cell transplantation.

How could this technology accelerate SCI research?

Crone: Neurons project over long distances and multiple segments. With histological sectioning, you can’t see the entire neuron, just pieces of it at a time. The new method allows us to look at the entire neuron at once to assess axon damage or regrowth and note changes in morphology to reveal which pathways were disrupted by the injury and which weren’t. This enhances the study of spinal cord neural circuits and what affects their plasticity, function and connectivity after an SCI.

How does this fit into the bigger picture of your lab’s work?

Crone: My lab uses a variety of approaches to study the control of breathing in transgenic mice at the level of the whole animal (plethysmography, electromyography), neural circuit (synaptic tracing, 3D imaging) and individual molecules (RNA sequencing). We are working to develop new approaches to repair or enhance the function of respiratory circuits to improve breathing in patients with SCI and neuromuscular diseases such as ALS. Our most recently funded work explores ways to prevent respiratory deficits leading to sudden death in epilepsy.

Are there particular spinal neurons that could be therapeutic candidates for breathing issues associated with SCI?

Crone: A few years ago, our lab discovered that the V2a class of neurons activates accessory respiratory muscles when needed to maintain ventilation in patients with a neuromuscular disease or SCI. More recently, we found that altering the firing activity of V2a neurons can restore inspiratory activity to a previously paralyzed diaphragm in a mouse model of cervical SCI. Current work focuses on identifying genes expressed by V2a neurons that are important for respiratory circuit plasticity and could serve as drug targets to improve breathing following injury. Longer-term, we hope to identify molecules in V2a neurons to use as drug targets to improve breathing.

Targeting seizures that start deep in the brain with responsive neurostimulation.