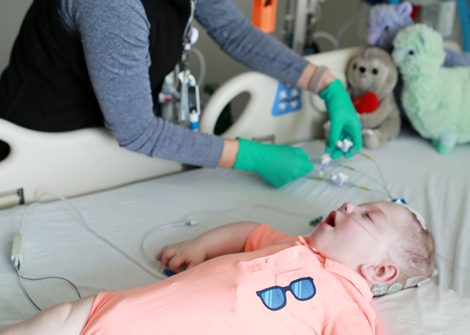 Neuroscience researchers at Cincinnati Children’s have generated a novel transgenic rat L1cam knockout model of pediatric hydrocephalus with human genetic etiology. This achievement builds on the research team’s previous work, published in 2018, in which they reported a mouse model of neonatal hydrocephalus. The L1cam rat model exhibited X-linked hydrocephalus.

“The rat models of hydrocephalus we have developed open up new possibilities for us to explore surgical interventions and noninvasive imaging procedures for neonatal hydrocephalus, due to their much larger size compared to mouse models,” says Francesco Mangano, DO, director of the Division of Neurosurgery at Cincinnati Children’s.

“The L1cam rat grew slowly in the juvenile stage, which allowed us to look at the periventricular white matter tracts in hydrocephalus in detail using DTI,” says June Goto, PhD, one of the study’s researchers. “Since L1cam is the gene that is most frequently mutated in infant hydrocephalus, we believe we can learn a lot about human disease from this model. In fact, one of our goals with this L1cam rat model is to develop clinically useful, noninvasive imaging markers for neonatal hydrocephalus in children.”

Following the announcement of the L1cam rat model, the Mangano lab developed another rat model (CCDC39), which mimics a severe form of neonatal hydrocephalus in humans. Researchers are using this to study the glymphatic system’s role in the development of the brain. Impairment of this system may cause a malfunction in the brain’s neural system, contributing to hydrocephalus.

The L1cam study was published online in the Journal of Neurosurgery (February 8, 2019).

Initial research is encouraging, showing the new methods to be safer and more effective than standard practice.

The study examines whether ventricle size alone is an accurate indication of surgical need.