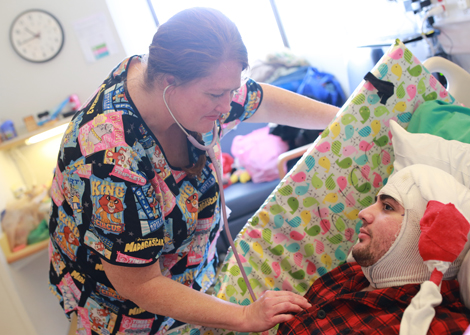 Epilepsy specialists at Cincinnati Children’s have been using stereotactic electroencephalography (SEEG) to identify seizure onset zones and resect/ablate diseased brain tissue for a few years. Now they are using the same technology to identify areas of the brain that are engaged in language and sensorimotor function. A recently published study demonstrates the safety and efficacy of the team’s novel SEEG mapping protocols for language responses; results from a similar study focusing on sensorimotor responses are promising as well.

“Advancements in vascular imaging and robotic surgery have improved the safety of SEEG considerably in recent years, and as our neurosurgeons began using this technology more and more, we saw an opportunity to sample different regions of the brain in a way that has not been possible with subdural grids,” says Ravindra Arya, MD, DM, a pediatric epileptologist at Cincinnati Children’s.

The usual method of mapping eloquent cortex in pediatric patients is to place subdural grid(s) on the surface of the brain and perform language and sensorimotor tests in the epilepsy monitoring unit using electrical stimulation mapping (ESM). In contrast, stereotactic EEG involves placing electrodes deep in the brain. The epileptologist uses ESM to stimulate areas of the brain and performs bedside tests similar to those used on patients with subdural grids. Brain mapping data is fused with imaging tests that show where the seizure onset zone is located, and neurosurgeons use that to create an optimal surgical plan.

From the patient’s perspective, the bedside testing is the same, whether using a subdural grid or SEEG. But from the epileptologist’s perspective, the technology, physics and geometry are very different. This required the team to develop novel protocols for adjusting the electrical stimulation, pulse duration and current strength and for sequencing the language and sensorimotor tasks.

To validate the new protocols, Arya and his colleagues sought an objective reference standard that was generalizable and reproducible. They chose NeuroSynth, an online platform that automatically extracts and synthesizes data from published functional neuroimaging (fMRI) studies. This platform allowed the researchers to compare ESM of language with SEEG to three-dimensional language fMRI data. Results demonstrated that their method of localizing parts of the brain associated with language and speech provide high diagnostic specificity on par with results using subdural grids.

Based on their initial research and clinical experience, pediatric epileptologists at Cincinnati Children’s are using SEEG ESM routinely in every patient who can comply with the language-based and sensorimotor tasks. “We hope that as other scientists and clinicians learn about the SEEG ESM technique, it becomes more widely accepted due to its safety and efficacy compared to standard practice,” Arya says.

The study, “Electrical stimulation mapping of language with stereo-EEG,” was published in Epilepsy & Behavior (August 15, 2019).

The study examines whether ventricle size alone is an accurate indication of surgical need.