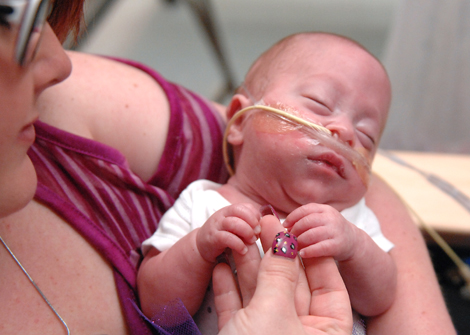 The landmark Management of Myelomeningocele Study (MOMS) demonstrated the unequivocal efficacy of prenatal surgery in achieving primary outcome measures for children with this condition. When compared to postnatal closure, open prenatal surgery cut the risk of hydrocephalus in half, increased a child’s chances of being able to ambulate independently and reversed hindbrain herniation in nine out of 10 patients.

Regardless of when the defect is closed, many children with myelomeningocele develop enlarged ventricles of the brain. This can cause symptoms of hydrocephalus, including vomiting, lethargy and neurological decline, which indicate an urgent need for surgery. However, during the MOMS trial, researchers observed that repairing the defect prenatally imparted a protective effect against hydrocephalus. About 70% of children in the study who had a prenatal repair developed larger-than-normal ventricles but didn’t get sick. They met the criteria for shunting due to ventricle size, but in about one in four cases, their care team elected not to shunt since they were asymptomatic.

That made Cincinnati Children’s pediatric neurosurgeons Francesco Mangano, DO, and Charles Stevenson, MD, wonder: When should kids who had a prenatal repair be treated for hydrocephalus if they have larger-than-normal ventricles but are asymptomatic? If ventricle size alone doesn’t accurately predict surgery, what does?

“As more centers offer prenatal myelomeningocele repair, answering these questions becomes increasingly important,” says Stevenson, who performs prenatal repair of myelomeningocele at Cincinnati Children’s. “Our team decided to look at the overall health of the deep white matter that surrounds the ventricles. We know that when the ventricles enlarge significantly, the white matter can get stretched and injured. Perhaps diffusion tensor imaging (DTI) could help us detect early injury in the white matter, which could be a better surgical indicator than ventricular size alone.”

The team did a retrospective study of eight patients who had undergone prenatal myelomeningocele repair at Cincinnati Children’s. They analyzed DTI data from routine scans taken at birth, at a few months of age and subsequently at one-year intervals. All scans were performed using the same magnetic resonance imaging unit.

Mangano developed a model for DTI that calculated values from different areas of white matter and correlated them with the size of the ventricles. The researchers were able to use the DTI data to track and identify white matter abnormalities in the brains of kids who had enlarged ventricles, demonstrated clinical symptoms of hydrocephalus and had been surgically treated.

“This was a small study, but an important one because it serves as an interesting proof of principle that DTI may be an imaging biomarker for assessing hydrocephalus,” Stevenson says. “We want to do a similar study on a larger scale and potentially create standardized DTI protocols to guide treatment decisions. DTI could help us predict who is at risk for hydrocephalus and who is not, and potentially avoid unnecessary surgery.”

Hear from the director of the Division of Neurology, Andrew Hershey, MD, PhD, who was a senior author of the new guidelines.