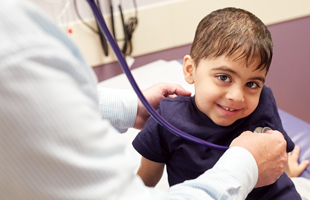 Scientists have known for some time that prolonged antibiotic use among patients receiving hematopoietic stem cell transplantation (HSCT) can lead to a loss of microbiome diversity, increasing the risk of potentially fatal graft-versus-host disease (GVHD).

Now a study led by scientists at Cincinnati Children’s sheds light on the mechanisms involved and suggests potential ways to reduce the risk.

The researchers analyzed stool and tissue samples from 42 study participants, all of whom received broad-spectrum antibiotics at the first fever following HSCT. The samples revealed significant declines in the short-chain fatty acids acetate, butyrate and propionate at day seven and day fourteen following HSCT. These findings suggest that antibiotics used to protect HSCT patients from dangerous infections also reduce the production of short-chain fatty acids. This disruption to the microbiome could be a cause of increased gut GVHD and mortality after HSCT.

Of the 42 participants, 10 went on to develop GVHD. In these patients, the concentrations of butyrate, propionate and acetate in the stool at day 14 after HSCT were significantly reduced compared to previous concentration levels.

These findings emphasize the importance of selecting antibiotics judiciously and using them sparingly for HSCT patients, the study authors say. Improving the diagnosis of post-HSCT infections is a priority as well. As part of the study, the researchers began to explore whether urinary biomarkers might reflect changes
in intestinal microbiota.

“Antibiotics are often used liberally in bone marrow transplant patients. These data show that we should limit antibiotic use as much as possible. We have changed our practice to do this, and now see a reduced rate of GVHD,” says the study’s senior author, Stella Davies, MBBS, PhD, MRCP, director of the Bone Marrow Transplantation and Immune Deficiency Division at Cincinnati Children’s.

“Other studies have investigated the use of fecal microbiota transplantation in allogeneic-HSCT patients with minimal risk to patients,” says Lindsey Romick-Rosendale, PhD, the study’s first author and a researcher in the Division of Pathology & Laboratory Medicine. “A combination of a modified fecal transplant in tandem with nutrient supplementation may allow for a successful recolonization of patients’ gastrointestinal tract post-HSCT, which is so important for these patients’ survival.”

The study appeared in Biology of Blood and Marrow Transplantation (December 2018).

This promising research could provide a transportable, safe and feasible gene therapy for all sickle cell anemia patients across the world even in developing nations.