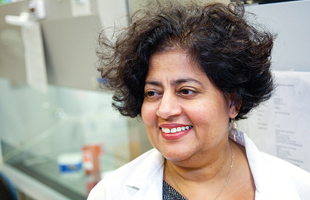 A new gene therapy for sickle cell anemia is reversing disease symptoms in two adults, a significant breakthrough that comes after more than a decade of development at Cincinnati Children’s. A key feature of the treatment regimen is its reduced-intensity preconditioning requirement, which lowers toxicities and increases the potential for use in resource-challenged parts of the world where sickle cell anemia is most common.

The therapy uses a modified lentivirus to carry a healthy fetal hemoglobin gene into a patient’s own blood stem cells. Principal investigator Punam Malik, MD, presented preliminary data from the Phase I–II clinical trial in December 2018, at the annual meeting of the American Society of Hematology.

“Over two years after treatment of our first patient, and over eighteen months after treatment of our second patient, both patients have seen a remarkable improvement in the quality of life due to a significant reduction in disease symptoms. This includes near elimination of chronic pain and sickling events and improved anemia,” says Malik, who is director of the Comprehensive Sickle Cell Center at Cincinnati Children’s. “These preliminary results are quite promising. If sustained, this therapy will provide a transportable, safe and feasible gene therapy for all sickle cell anemia patients.”

How the Therapy Works

The gene therapy developed by Cincinnati Children’s uses a modified gamma globin lentivirus vector to transfer a healthy fetal hemoglobin gene into a patient’s hematopoietic stem cells. The lentivirus  is modified so it does not cause illness.

The therapy comes from the observation that some adults never stop producing fetal hemoglobin (HbF). This prevents red blood cell sickling when sufficient quantities of HbF are present in the body. Normally, the fetal hemoglobin gene switches off shortly after birth. The new gene therapy approach designed by Malik and team places a fetal hemoglobin gene in the bone marrow cells that cannot switch off. The team’s preclinical studies suggested the treatment allows the body to produce normal red blood cells instead of the sickle-shaped cells that define the inherited disease.

Sickle cell anemia affects more than 90,000 people in the United States and millions of people worldwide. The method is less toxic and expensive than myeloablative preconditioning normally used in bone marrow transplants, according to the researchers. This could make the therapy more practical for hospitals in developing nations.

In an effort to accelerate the development of the therapy, Cincinnati Children’s has partnered with Roivant Sciences to create Aruvant Sciences. The joint venture is focused on developing and commercializing innovative therapies for hematological conditions. Aruvant’s lead candidate is RVT-1801, the gene therapy used to treat both patients in Malik’s ASH presentation of early clinical trial data.

The trial is scheduled to treat up to 10 patients with sickle cell anemia. Enrollment is open to adults ages 18–35, with plans to include pediatric patients later.