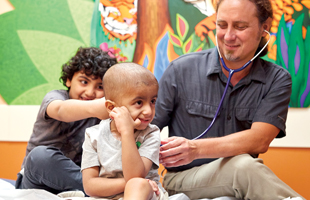 Children with high-risk leukemia who have failed multiple courses of chemotherapy face a poor prognosis. But in a recent clinical trial at Cincinnati Children’s, almost 50% of participants achieved a favorable response after undergoing a novel experimental therapy using the liposome CPX-351. The study led researchers to explore a new experimental protocol that could help even more children achieve this result.

In the first study, the CPX-351 liposome (Vyxeos) was packed with two common chemotherapy drugs, cytarabine and daunorubicin. The nanoparticle bypassed usual drug-resistant mechanisms to attack the cancer cells. Most of the patients in the initial study who achieved a favorable treatment response went on to bone marrow transplant. These same patients had failed previous therapies—including cytarabine and daunorubicin.

“A response rate of almost 50% is impressive since these patients had no other path to remission. We anticipate that the study data will lead to an acceptance of Vyxeos therapy as the standard of care for specific types of pediatric relapsed or refractory leukemia.”

Absalon presented these encouraging results at the American Society of Hematology annual meeting in December 2018. The study provided a rationale for a second Vyxeos study, now underway at Cincinnati Children’s. The Phase I trial will evaluate a combination therapy of intravenous Vyxeos and oral venetoclax in pediatric and young adult patients who have refractory or relapsed acute leukemia. Venetoclax is gaining momentum in adult cancer research but is relatively new in research involving children.

Absalon and his research team began studying venetoclax during the first Vyxeos trial. They were concerned about a nine-year-old boy in the study who had residual acute myeloid leukemia following treatment with Vyxeos. Hoping to learn more, they performed single-cell RNA sequencing on samples of blood taken immediately prior to CPX-351 therapy and on days three and five of therapy.

“We analyzed diverse leukemia cell populations and found a high RNA signature of BAX, a protein that plays a role in deciding whether the cell survives or dies,” Absalon says. “Cancer cells tend to influence this decision with a protein called BCL2. Since venetoclax is a BCL2 inhibitor, we thought the drug might tip the balance toward leukemia cell death.”

Absalon and his colleagues decided to give the patient a second course of CPX-351 therapy but this time with venetoclax. After receiving the combination therapy, the patient had no detectable leukemia. He then had a second, successful bone marrow transplant and is doing well.

Cincinnati Children’s began enrolling patients in the Phase I Vyxeos-venetoclax study in January 2019. To qualify, patients must be between one and 39 years old and have relapsed or refractory leukemia.

To learn more or discuss a specific patient for enrollment, please contact cancer@cchmc.org or 513-636-2799.

This promising research could provide a transportable, safe and feasible gene therapy for all sickle cell anemia patients across the world even in developing nations.