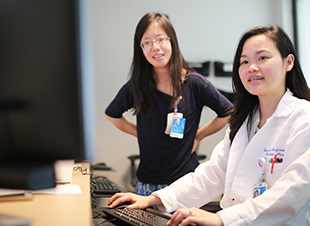 Research within the Division of Neurology focuses on a wide range of conditions, including epilepsy, headache and migraine, autism, stroke, neuromuscular disorders and tuberous sclerosis complex. Below are 2018 highlights from a few key areas of study.

Electrical cortical stimulation (ECS) has long been considered the gold standard for presurgical localization of the language cortex. However, in a study published in Clinical Neurophysiology (2017), researchers found a high incidence of after-discharges (77%) and seizures (35%) during ECS. A related study in the same publication suggested that functional responses in children may require ECS at currents superseding cortical excitability thresholds. These studies raise concerns about the safety and neurophysiological validity of ECS brain mapping, emphasizing the need for an alternative method.

Early work with high-gamma modulation (HGM) is promising. Researchers at Cincinnati Children’s have developed an HGM language mapping paradigm, and validated it on children who may not cooperate with conventional language tasks requiring active engagement (Epilepsia, January 24, 2018) “HGM has shown encouraging results and is very safe compared to ECS,” says Ravindra Arya, MD, DM, a pediatric epileptologist with the Comprehensive Epilepsy Center at Cincinnati Children’s. “We have not used HGM in clinical practice yet, but as we continue to develop better approaches for data gathering and computational analysis, we hope to further demonstrate the neurophysiological validity of this approach.”

Last summer Judith Dexheimer, PhD, presented a novel algorithm that uses artificial intelligence and machine learning to help accelerate the process of making an appropriate referral for epilepsy surgery. The algorithm runs on a software program that is embedded in the hospital’s electronic health record. It analyzes previous provider notes, considering the words, tone and themes, then uses a scoring system to identify patients who meet neurosurgical criteria. The presentation was part of a National Institutes of Health workshop.

The influence of sodium channel variance

Recent work by pediatric epileptologist Katherine Holland-Bouley, MD, PhD, and others at Cincinnati Children’s focuses on how genes associated with sodium channel variance influence epilepsy and other neurologic conditions. A study published in Epilepsia (July 2017) evaluated the relationship between sodium channel variants and Dravet syndrome, finding that most existing predictive algorithms overestimate the likelihood that the disease is caused by the gene variant. “We synthesized these algorithms and developed one that can predict the pathogenicity of a mutation with 90% accuracy, which can be very helpful in guiding treatment decisions,” Holland-Bouley says.

The algorithm is available to providers at cincinnatichildrens.org/service/c/epilepsy/sn1a.

Researchers at Cincinnati Children’s are working with five pharmaceutical companies to design and implement clinical studies for children and adolescents that test a variety of compounds targeting the calcitonin gene-related peptide (CGRP) pathway. The peptide influences the transmission of pain in the region of the dorsal root and trigeminal ganglions; CGRP antagonists and antibodies target the CGRP receptor or the peptide itself.

CGRP represents a new frontier in migraine therapy, in that the compounds target a suspected underlying pathophysiological mechanism, says Andrew Hershey, MD, PhD, director of the Division of Neurology and Headache Center at Cincinnati Children’s. Hershey wrote an editorial published in the New England Journal of Medicine (Nov. 30, 2017) about the potential of CGRP therapies for migraine.

The continuing pursuit of a novel treatment for CDM1

Discoveries made by Lubov Timchenko’s research lab at Cincinnati Children’s led to the first clinical trial for congenital myotonic dystrophy type 1 (CDM1). Data from the phase IIa trial, completed in 2017, showed positive results in patients, and led to a Phase II/III study for pediatric CDM1 in a multi-center international study, currently in preparation.

The phase IIa trial confirmed Timchenko’s academic findings spanning the last two decades. She proposed a novel therapeutic approach based on the correction of a signaling molecule, GSK3β kinase, which alters activity of RNA-binding proteins in patients with CDM1 and DM1. The clinical studies, sponsored by AMO Pharma, examine the therapeutic effects of the clinical-trial-ready inhibitor of GSK3β, AMO-02 in vivo models of DM1 and CDM1.

The Shift to Fetoscopic Repair of Myelomeningocele

Neurostimulation, laser ablation and other advanced surgeries are offered through the hospital’s Comprehensive Epilepsy Center.