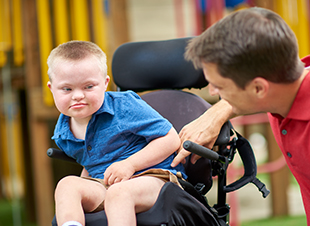 More and more children with intractable epilepsy are undergoing surgical treatment at Cincinnati Children’s than ever before, thanks to the introduction of two advanced procedures—neurostimulation and laser ablation.

Neurostimulation, which the hospital began offering in 2018, is particularly useful for partial onset seizures caused by lesions that cannot be surgically removed due to their location. Using robotic surgery and stereotactic electroencephalography (EEG) guidance, the neurosurgeon places electrode wires deep in the brain, on or near the seizure focus. The wires are connected to a stimulator implanted just beneath the scalp; the stimulator is programmed to deliver short electrical bursts. This therapy modulates brain activity and prevents seizures without causing damage to eloquent brain tissue.

“Previously, these patients would not have been surgical candidates, although we may have offered vagus nerve stimulation to ease their symptoms,” says Francesco Mangano, DO, director of the Division of Pediatric Neurosurgery at Cincinnati Children’s. “Neurostimulation has been used in adults for a few years, and it is likely that many children will benefit from it. The hope is that by providing this therapy when patients are very young, we can help them avoid cognitive delays, problems with memory and other neurologic concerns that are associated with frequent seizures.”

Another option for some patients with intractable epilepsy is laser ablation, which destroys diseased tissue that is causing seizures. The neurosurgeon, again using robotic surgery and stereotactic EEG guidance, places electrodes deep in the brain. These electrodes provide a detailed map of the seizure focus, and allow the neurosurgeon to obtain information about different regions of the brain in a way that was not possible with subdural grid placement alone.

“If we identify a seizure focus, we can immediately remove the electrode, replace it with a laser catheter, and ablate the lesion,” Mangano says. “Everything is done stereotactically through three-millimeter burr holes in the skull, rather than with a craniotomy, and patients usually go home the next day. In the future, if the patient is experiencing some improvement but not complete seizure freedom, we can consider a different surgical approach. Re-evaluation is not as challenging as it is after a craniotomy and subdural grid placement, in part because laser ablation causes minimal scarring.”

Patient volume for this procedure is on the rise, with 15 cases in 2018 compared to six in 2017. Surgical outcomes for patients who undergo laser ablation are on par with those for patients who have a craniotomy and grid placement. With overall patient volume increasing, the division has added a second pediatric neurosurgeon, Jesse Skoch, MD, to the epilepsy surgery service. Skoch, who joined the Cincinnati Children’s faculty in 2016, specializes in the surgical treatment of epilepsy, spinal deformities, craniofacial malformations and hydrocephalus, utilizing minimally invasive techniques whenever possible.

See the latest from our studies in epilepsy, migraine therapy and CDM1.