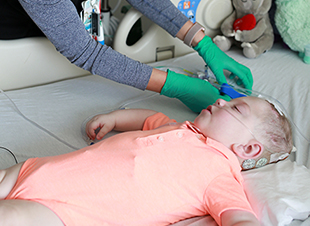 When June Goto, PhD, received a novel mouse model of progressive hydrocephalus (PRH) from a colleague at Cincinnati Children’s in 2014, she recognized a golden research opportunity. Using high-speed video microscopy and whole genome sequencing, her work in the Mangano laboratory resulted in key findings related to the molecular and cellular mechanisms regulating cerebrospinal fluid (CSF) flow in the developing brain. Study results appeared in the journal Development in January 2018.

The mouse mutants came from the lab of Rolf Stottmann, PhD, a faculty member in the Divisions of Human Genetics and Developmental Biology at Cincinnati Children’s. “A good mouse model that mimics human neonatal hydrocephalus has been elusive, but this one showed very robust and complete penetrance of hydrocephalus,” says Goto, a researcher in the Division of Neurosurgery.

Using whole genome sequencing analysis, the researchers noted a homozygous splice site mutation in a coiled-coil domain that contained protein 39 (Ccdc39). The Ccdc39 gene is essential for the generation of motile cilia, which many scientists believe is associated with the normal flow of CSF. High-speed video microscopy revealed that in the PRH mouse model, the Ccdc39 ependymal cells developed abnormal cilia, which disrupted and ultimately stopped the flow of CSF.

“Collectively, our data provide the first evidence for involvement of Ccdc39 in hydrocephalus, and suggest that the proper development of medial wall ependymal cilia is crucial for normal mouse brain development,” Goto says.

More study is needed to fully understand the mechanisms that lead to the accumulation of CSF in the cerebral ventricles, Goto adds. She notes that if future research can confirm the role of abnormal cilia in certain forms of hydrocephalus, it may be possible to modulate motile cilia and CSF flow by correcting the Ccdc39 gene mutation. Thus, the study may have opened up a new avenue to pharmacological, rather than surgical, interventions for some forms of this debilitating and life-threatening condition.

Neurostimulation, laser ablation and other advanced surgeries are offered through the hospital’s Comprehensive Epilepsy Center.

The Shift to Fetoscopic Repair of Myelomeningocele