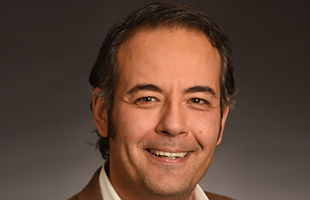 Although scientists discovered the genetic cause of cystic fibrosis (CF) 30 years ago, a direct connection between the genetic mutation and the disease’s destructive inflammation has been difficult to identify. Until now. Cincinnati Children’s researchers have uncovered the chain of events that occur between the malfunctioning cystic fibrosis transmembrane conductance regulator (CFTR) gene and a crucial transcription factor that serves as a shutoff valve for inflammation, Nrf2.

“It hasn’t been easy to directly link CFTR function to the inflammatory pathology of the disease,” says Assem Ziady, PhD, who led the study published this August in the Journal of Clinical Investigation. “Some connections are obvious, such as how the chloride channel helps hydrate the surfaces of lungs, gut and other epithelial tissues in the body, allowing for clearance of bacteria. But it’s been a struggle to link CFTR function to aberrant inflammatory signaling. And inflammation is the lead cause of mortality and morbidity in CF.” 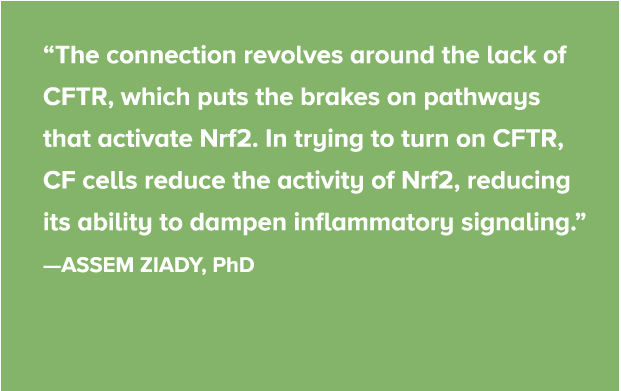 Ziady’s team demonstrated how cellular responses to dysfunctional CFTR inhibit Nrf2. “The connection revolves around the lack of CFTR,” he says, “which puts the brakes on pathways that activate Nrf2. In trying to turn on CFTR, CF cells reduce the activity of Nrf2, reducing its ability to dampen inflammatory signaling.”

The researchers then explored whether clinically approved “corrector” drugs VX809 (lumacaftor) and VX661 (tezacaftor)—compounds that correct defective CFTR—can restore Nrf2’s activity. They found they did so through activating CFTR.

“The caveat is, full restoration of Nrf2 was only achieved at doses higher than what is currently given,” says Ziady. His team tested both current and elevated doses, and found higher doses to be significantly more effective.