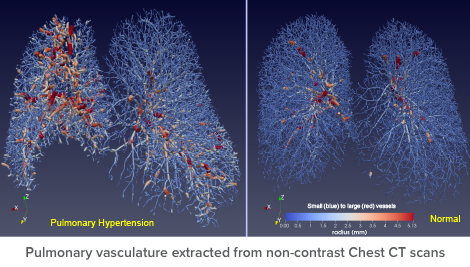 “The novelty of this approach is that we can quantify even the smallest vasculature without having to make a guess from a black and white CT image,” says Goutham Mylavarapu, PhD, Cincinnati Children’s researcher. “We use computational fluid dynamics (CFD) to noninvasively measure pressures across pulmonary blood vessels in a patient.”

Mylavarapu, who has an aerospace engineering background, says in addition to defining vascular structural and hemodynamic components, he is working on artificial intelligence (AI) models to stratify a person’s risk of developing PH.

He states, “The whole point of this tool is early intervention to keep high-risk patients from developing PH. Currently, the gold standard for diagnosing PH is a right heart catheterization, but that’s invasive. Another option, echocardiogram, is noninvasive, but you have to do a series over time and make a judgment about PH progression. I want to complement existing tests with our noninvasive model so physicians can get accurate information about whether pressures are mild, moderate or severe.”

Mylavarapu is a co-investigator for a CF Foundation-funded study recruiting patients to evaluate differences in their vasculature before and after taking a newly approved medicine for CF called Trikafta®. His 3D computational model will evaluate both structural and hemodynamic aspects of pulmonary vessels pre- and post-drug therapy. Trikafta is a combination of three drugs that target the defective CFTR protein, which causes CF. It helps the protein made by the CFTR gene mutation F508del function more effectively.

In addition, Mylavarapu has applied for a National Institutes of Health grant to study SSc to determine effectiveness of tracking pulmonary arterial pressures noninvasively by incorporating imaging, CFD and AI. He wants to apply novel imaging algorithms to non-contrast CT scans and phase-contrast MRI images. Mylavarapu wants to establish efficacy in adults first, because the tool requires several CTs.

“When we have determined its value, we can use it for babies born prematurely with under-developed pulmonary vasculature who are at risk for developing PH by age 1 or 2. We eventually hope to apply the refined tool to different patient populations,” he adds.