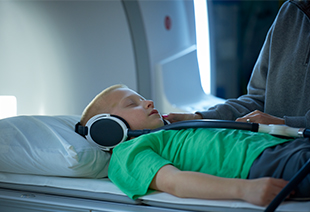 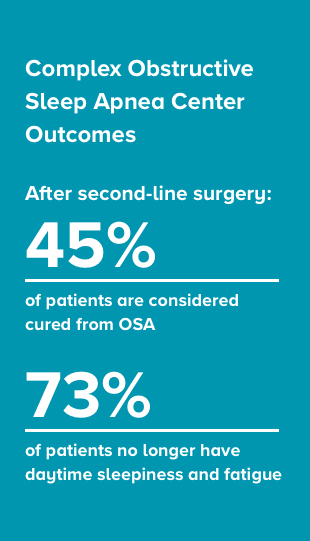 Formerly called the Upper Airway Center, the newly named center continues to move forward to ensure that Cincinnati Children’s is a leader in sleep medicine. Achievements over the past year include offering two key diagnostic tests during one visit: drug-induced sleep endoscopy (DISE) and cine magnetic resonance imaging (MRI). The first uses sedation that mimics sleep to evaluate obstructions that occur in the airway during sleep. The second uses MRI to create a moving picture of the airway.

The center has gradually improved the outcomes of its surgical and non-surgical interventions. After second-line surgery, 45% of patients are now considered cured from OSA. Additionally, 73% no longer have daytime sleepiness and fatigue after surgery.

The combination of MRI imaging of the upper airway and endoscopy have allowed the teams to select the most suitable intervention, according to Christine Heubi, MD, surgery director at the center.

The center has a robust research program, which includes the following areas of investigation:

Virtual surgery training: A team of full-time PhD scientists, including engineers, work with physician scientists on research, such as using cine MRI to create virtual surgeries and evaluate the change in air flow and anatomy on computer before performing surgery.

Underpinning these advancements is strong collaboration, says Raouf Amin, MD, program director for the center and director of the Division of Pulmonology. He notes, “We’re unique in holding a weekly multidisciplinary sleep medicine conference with pulmonologists, otolaryngologists, plastic surgeons, genetic counselors and others to discuss a child’s case before they arrive for evaluation.”

The team treats children with Down syndrome, craniofacial anomalies, obesity, achondroplasia, infant laryngomalacia and other syndromes, whose sleep apnea has persisted despite removal of adenoids and tonsils. Treatment options range from continuous positive air pressure (CPAP) or a dental device, to surgery, based on the obstruction site.