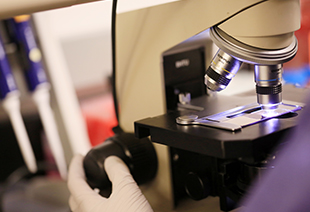 Researchers at Cincinnati Children’s are pursuing multiple investigations that may settle debates over the pathologic clinical importance of diffuse white matter abnormality (DWMA) in preterm infants of 32 weeks or less gestational age. Up to 70% of these very premature infants show signs of white matter abnormalities by NICU discharge. Some, but not all, of those infants go on to develop cognitive, language, motor or behavioral disorders as they grow.

“While most researchers and doctors have concluded that DWMA is not pathologic, our novel studies are concluding otherwise,” says Nehal Parikh, DO, MS, a neonatologist and researcher with the Perinatal Institute at Cincinnati Children’s.

One of the most recent studies published by Parikh and his colleagues in Neuroimage: Clinical in 2021 strengthens the theory that DWMA is a potential biomarker for brain disorders. The study establishes that DWMA is associated with widespread decreased brain network efficiency, suggesting that it is pathologic and likely has adverse developmental consequences. The decreased efficiency is due in large part to abnormal myelination compromising information transfer throughout the network. 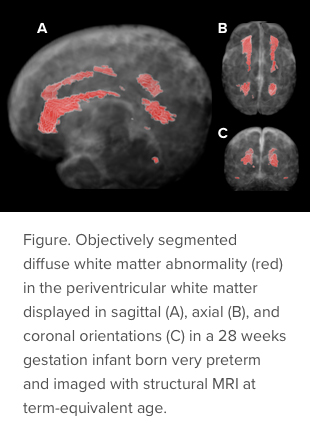 Parikh, with co-developer Lili He, PhD, and others, also published in 2021 a paper in Radiology: Artificial Intelligence documenting development of a 3D ResU-Net deep learning model for DWMA quantification on T2-weighted MR images. The 3D ResU-Net demonstrated consistently and significantly better segmentation performance than several other advanced deep learning models.

“Most studies have diagnosed DWMA qualitatively based on visual readings from radiologists (yes/no, mild/moderate/severe). These subjective diagnoses have been unreliable and therefore have not been significantly associated with neurodevelopmental disorders,” Parikh says.

Because quantification in the most recent study was applied to small datasets (internal cohort of 98 and external cohort of 28), Parikh and his team are further validating the tool using larger cohorts from multiple sites.

In 2020, his team used a similar DWMA segmentation software tool and built a statistical model to predict which infants are most at risk for developmental disorders. The tool can predict the risk of motor development disorders (e.g., cerebral palsy), as reported in Nature Scientific Reports. The method was sufficiently accurate to enable early diagnosis at term corrected age. This new tool shows that DWMA volume significantly and independently predicts cerebral palsy, diagnosed at 3 years of age. 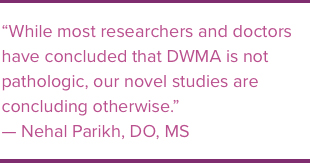 Parikh’s team reported in the Journal of Pediatrics in 2020 that DWMA volume significantly predicts cognitive and language development at 2 years of age. Affected children were previously not diagnosed with these disorders until 2 to 5 years of age. In a second article published in the Journal of Pediatrics in 2021, the team noted DWMA volume associations with the two most common neonatal diseases, bronchopulmonary dysplasia and retinopathy of prematurity.