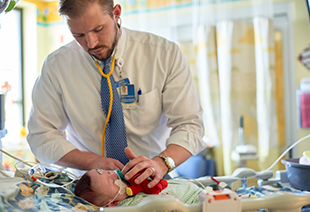 The Bronchopulmonary Dysplasia (BPD) Center at Cincinnati Children’s is a regional and national hub for BPD care. The program has reduced mortality, tracheostomies and hospital readmissions for infants with BPD by significant numbers since its start in 2018. 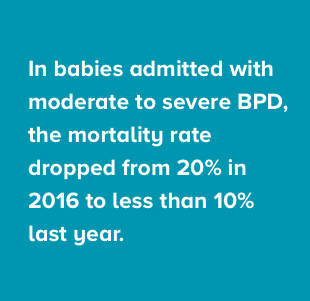 Significant accomplishments in the past year include:

Most babies remain in the NICU for at least three to four months. After discharge, the infants are closely followed by the NICU BPD Follow-Up Clinic, which cares for about 87 patients. The Center’s rate for follow-up visits is 95%. Over the past three years, a combination of relationships built during initial hospitalization and close outpatient follow-up has contributed to a 54% decrease in total re-admissions in the first year of life for all infants discharged on oxygen.

Adding to the year’s successes, according to neonatologist Melissa House, MD, is “a new protocol that provides consistency for oxygen weaning that utilizes home oximetry studies to ensure babies are appropriate to wean from supplemental oxygen overnight.”