Groundbreaking Results Could Be First Step to New Treatment Strategies 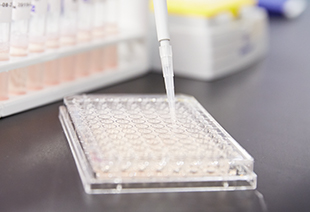 Several first-time discoveries about acute kidney injury (AKI) response may lead to improved treatment strategies. A study led by Cincinnati Children’s is reported in the Journal of the American Society of Nephrology.

“Current management of AKI is merely supportive. We wanted to pursue a deeper understanding of the molecular and cellular pathways involved in AKI response to identify targets that could lead to new treatments,” says Valeriia Rudomanova, MD, PhD, post-doctoral fellow in the Division of Nephrology and Hypertension at Cincinnati Children’s in the laboratory of Prasad Devarajan, MD, FAAP, FASN.

Novel findings of the study include:

1. “Age not only matters but plays a definitive role,” according to Rudomanova. The researchers’ murine ischemia/reperfusion AKI model demonstrated that younger animals recover from AKI in two weeks, while older animals exhibited kidney fibrosis at this time point.

2. Novel genes not formerly recognized in AKI have been identified. The genes Ahnak, Sh3bgrl3, Myh9 and Col18a1 could potentially be used as novel AKI markers. 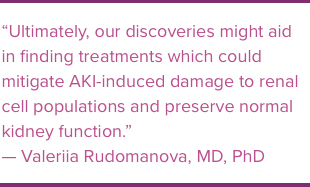 3. Injured kidney cells demonstrate “embryonic” phenotype. Renal proximal tubular epithelial cells exhibit high metabolic activity due to their functions, including reabsorption, and thus are particularly susceptible to ischemia-induced oxygen deprivation. AKI caused significant dedifferentiation, or loss of mature characteristics, in the proximal tubules, along with re-expression of genes normally present in the developing kidney only (Sox4, Cd24a). Regarding this finding, Rudomanova says, “We think temporarily it might be beneficial to switch to the embryonic state and regenerate tubular cells lost during AKI. If prolonged, however, this could compromise the kidney function and lead to kidney fibrosis.”

4. During AKI, epithelial cells begin expressing genes normally present in stromal cells. A possible interpretation could be that the injured epithelial cells might indirectly contribute to kidney fibrosis. The impact of this change will be tested in subsequent experiments, Rudomanova says.

5. Epithelial and stromal cells talk to each other. Authors found that AKI results in significantly elevated epithelial-to-stromal crosstalk compared to the normal kidney.

“The goal of our research is to describe which cell types and genes are responsible for kidney injury. We’ve identified some potential AKI markers and targets,” Rudomanova says. “Ultimately, our discoveries might aid in finding treatments which could mitigate AKI-induced damage to renal cell populations and preserve normal kidney function.”