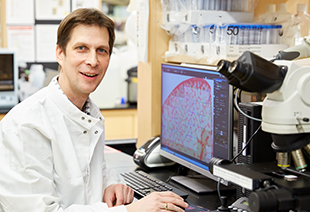 A referral from a gastroenterologist in the Middle East. Unique zebrafish and mouse models. Whole-exome screening and CRISPR gene-editing technology. These were the critical elements of a painstaking, years-long research study that led to discovering a link between the ABCC12 gene and progressive familial intrahepatic cholestasis (PFIC).

PFIC is a term used to describe several forms of inherited liver disease in which bile formation and excretion are impaired. Bile acid builds up in liver cells, leading to jaundice, severe pruritus (itching) and malabsorption. PFIC types 1-4 are linked to specific genetic variants, but in 30-40% of children with severe itching and jaundice, the genetic basis is unknown. 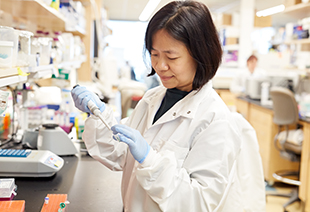 The path to discovering the significance of the ABCC12 mutation began when a gastroenterologist in Saudi Arabia asked specialists at Cincinnati Children’s to analyze DNA samples from a young girl whose liver disease started in infancy. A biopsy had revealed that about half of the bile ducts in the patient’s liver had not formed properly.

The research team headed by Alexander Miethke, MD,  and Chunyue Yin, PhD, conducted whole-exome screens, which detected the unique ABCC12 gene variant. ABCC12 produces a protein called MRP9, and the patient’s liver was not producing enough of this protein. It appeared that the gene variant might be responsible for the lack of her bile ducts. Confirming the theory would require a deep dive into the basics of liver function. 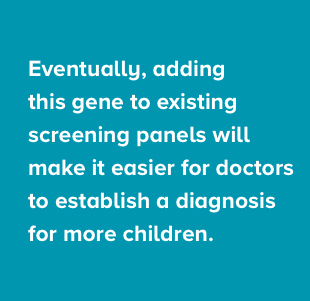 The first step was to use a zebrafish model to verify that knocking out the ABCC12 gene shuts down MRP9 protein production and disrupts bile duct integrity in the fish. Next, another long set of experiments using CRISPR technology to edit the ABCC12 gene showed the mutation in the gene leads to liver disease in mice. Finally, the researchers confirmed that the same mechanism occurs in humans. They did this by collecting samples from 89 children who had previously been found to have unexplained liver disease with similar characteristics as the “index case” detected in the young girl. Using more-targeted methods than whole-exome screening, the team found five more children with rare variants in the ABCC12 gene.

It remains unclear exactly how many more children might have a form of PFIC that is linked to the ABCC12 genetic mutation. Eventually, adding this gene to existing screening panels will make it easier for doctors to establish a diagnosis for more children.

The research could one day lead to the development of gene therapies, but much more study is needed. Miethke says that future research may help determine whether ABCC12 is a therapeutic target in children and adults who suffer from bile duct loss not for genetic reasons, but because of drug-induced liver injury, graft-versus-host disease or primary sclerosing cholangitis.

The study appeared in the March 23, 2021, online edition of Gastroenterology. 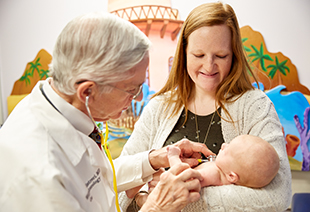 A new, multidisciplinary center at Cincinnati Children’s will offer comprehensive care for patients with PFIC and conduct research to discover the condition’s causes, develop new diagnostics and pursue novel treatments. The center, which builds on the care team’s decades of PFIC experience, will open in early 2022.

“Our dedicated, highly innovative pediatric hepatologists, liver surgeons, hepatology nurses and lab researchers are very pleased to offer this one-of-a-kind center for children with PFIC,” says William Balistreri, MD, a pediatric gastroenterologist who has done groundbreaking research in the field of cholestatic liver disease. “We will collaborate with other specialists at Cincinnati Children’s, including pediatric radiologists, endoscopists, pathologists, geneticists and dietitians, to provide the most advanced care for children with these rare and sometimes severe diseases.”

Children with PFIC are already benefiting from access to clinical trials at Cincinnati Children’s that are evaluating novel medication to decrease pruritus (itching). At the same time, the need for more effective therapies is urgent. “Many patients remain refractory to currently available treatments and those under clinical investigation,” Balistreri says. “Our researchers will continue their work to identify novel therapeutic targets to prevent progression of liver disease and avoid liver transplantation.”

Cincinnati Children’s has a history of innovation in PFIC. It was the first pediatric center to develop a clinical diagnostic test that screens for gene mutations in children with PFIC. This pioneering clinical test allowed pediatricians nationally to make an early diagnosis of PFIC. In addition, Balistreri and his colleagues were early adopters of external and internal biliary diversion procedures to decrease itching due to PFIC.

Promising Research Suggests Mammals Can Breathe Through Their Intestines

Research could lead to new treatments that allow intestinal oxygen intake in emergencies.