Promising Research Suggests Mammals Can Breathe Through Their Intestines

Could an enema-like treatment one day help people who are struggling to breathe? Preliminary research by a team of experts at Cincinnati Children’s and Tokyo Medical and Dental University (TMDU) has shown early-stage success with this novel strategy. Details were published May 14, 2021, in the journal Med.

The researchers developed two techniques that helped animals “breathe” through their intestines. One is an intestinal liquid ventilation system that uses highly oxygenized liquid perfluorochemicals administered through the rectum. The other is a gas ventilation system that delivers oxygen to the bloodstream via the rectum. Both showed promise in tests involving rodent and porcine models. 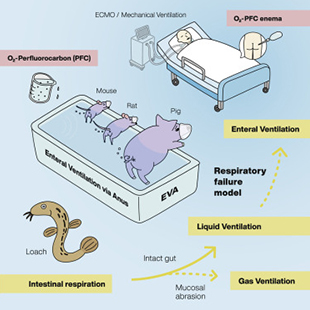 Senior author Takanori Takebe, MD, PhD, was inspired to study the concept because of his father’s struggle with lung disease and his own observations about access to mechanical ventilators. “Ventilators and artificial lungs aren’t always available, and they can run out, as we’ve seen in the COVID-19 pandemic,” says Takebe, a stem cell and developmental biologist who holds appointments at both Cincinnati Children’s and TMDU. “The level of arterial oxygenation provided by our ventilation system, if scaled for human application, is likely sufficient to treat patients with severe respiratory failure, potentially providing lifesaving oxygenation.”

Takebe’s previous work has included multiple breakthroughs in organoid development, including the world’s first three-organoid system (liver, pancreas and bile ducts). His interest in “intestinal breathing” is an offshoot of that organoid work — an attempt to repurpose existing organs as an alternative to growing new ones. 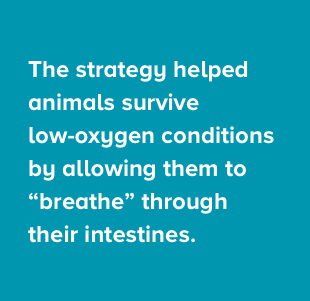 The intestinal liquid ventilation system – considered to be the most likely approach for potential use in humans – showed that rodents and pigs could walk farther in nonlethal, 10% oxygen conditions and that more oxygen reached their hearts compared to those not receiving the liquid. The intestinal liquid ventilation also reversed skin pallor and coldness without producing noticeable side effects.

The gas ventilation system helped 75% of mice survive 50 minutes of typically lethal low-oxygen conditions, while no mice survived more than 11 minutes without assistance.

More research is needed to better understand the mechanisms of the oxygen transfer and determine if the treatment works across different causes of respiratory failure, such as severe pneumonia versus acute respiratory distress. More work also is needed to assess the safety of such therapies for humans and how much oxygenation improvement can be achieved. Takebe hopes to complete preclinical research and transition into a Phase 1 clinical study next summer.