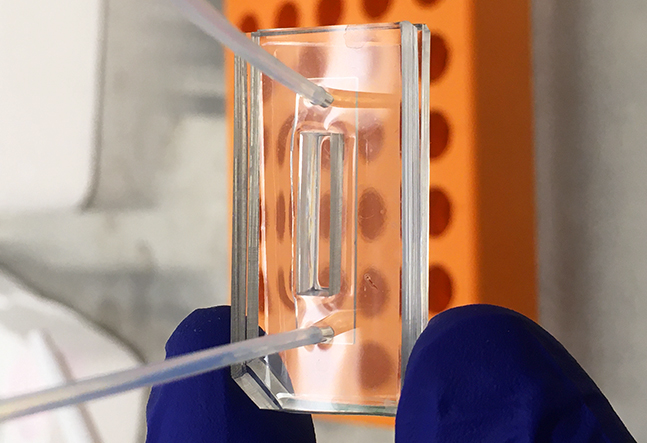 Last year, researchers in the Division of Pulmonary Medicine published their success with the first ever patient-derived “pancreas on a chip,” designed to improve understanding and treatment for CF-related diabetes. This year, those researchers - Anjaparavanda Naren, PhD, director of the Cystic Fibrosis Research Center, and instructor Kyu-Shik Mun, PhD, - have focused their work on examining the dynamics of mucus secretion and clearance in CF with an even more sophisticated lung on a chip.

Mun, a bioengineer, designed the lung on a chip to examine “mucociliary clearance” - the process by which healthy lungs use ciliated epithelial cells to clear mucus secreted by goblet cells. This process breaks down in CF patients, resulting in mucus-blocked airway surfaces.

Mun’s chip is composed of two cell culture chambers with a thin layer of porous membrane between them. The top chamber is open to allow air flow, and closely mimics in vivo physiology.  Naren says the chip design “gives the contraction, the stretch and relaxation, that precisely mimics human lung function.” 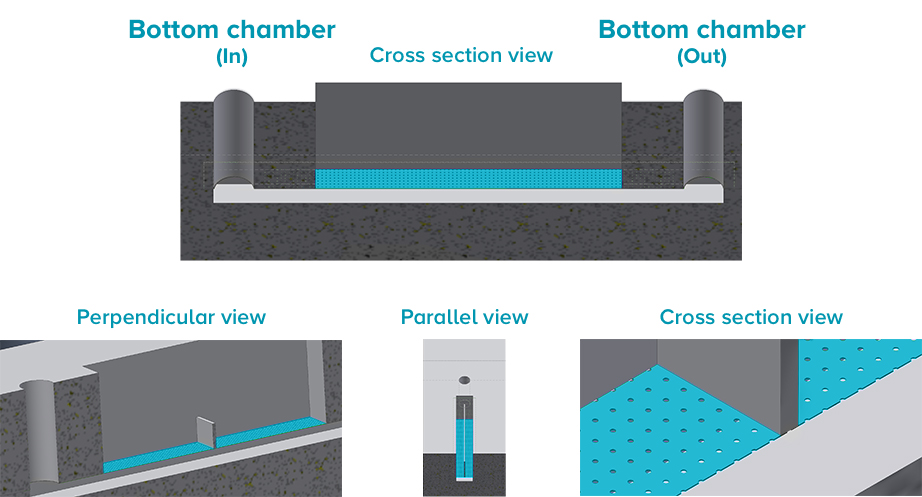 By placing patient-derived lung cells on the chip, the scientists are able to observe the behavior of different cell types simultaneously.

“We can differentiate patient-derived lung epithelial cells into ciliary cells and mucus-secreting cells,” Mun says. “The chip enables us to monitor mucus secretion, ciliary movement, mucociliary clearance and CFTR chloride channel function. In the middle of the open top chamber, a barrier separates the chamber so we can co-culture CF and non-CF cells and compare the physiology of these cells simultaneously under the same conditions.” 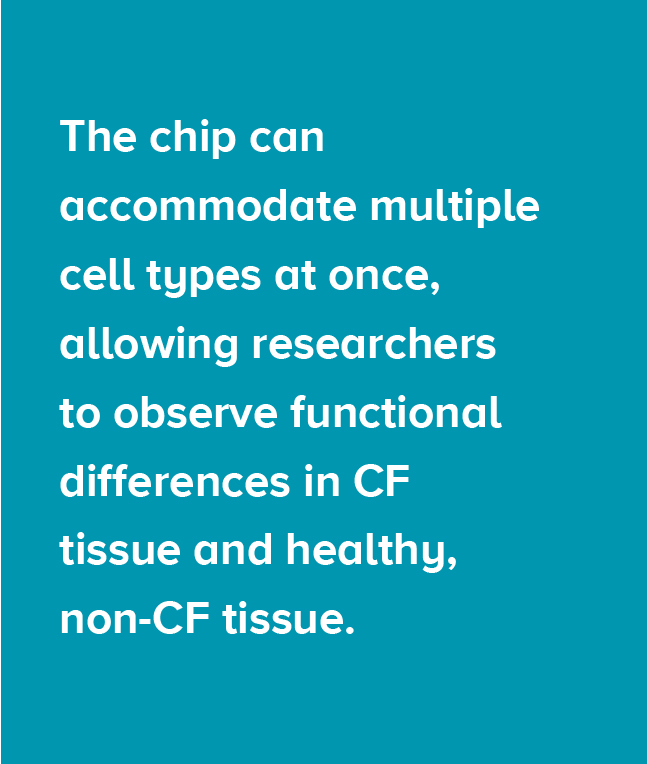 Expanding the Chip’s Use

Mun continues to make enhancements to the chip to expand its usefulness. He plans to build biosensors on the chip to monitor cell functions in real-time.

Currently, researchers are using the chip to screen mucus-clearing drugs for CF patients. They have already, on a trial basis, been able to identify and prescribe the most effective medications for CF patients by testing the drugs in a highly personalized manner. Naren says they are “very close” to offering this to CF patients on a widespread basis, at a reasonable cost.

“Patients will be able to come in, have their lung function tested and see what drug works best for them,” Naren says. “Right now we are using primary cells, so that we can reproduce the patient’s precise phenotype, but once we are more comfortable with it, we will move to using pluripotent stem cells and do it on a more expanded scale. The potential is limitless.”

Both inpatient and outpatient efforts contribute to improved outcomes.