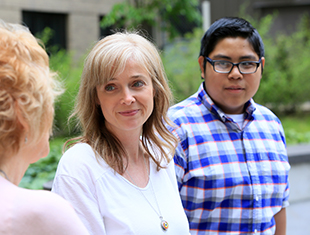 Cincinnati Children’s Kidney Transplantation Program expanded in fiscal year 2020, performing a record number of transplants, including the highest number of living donor kidney transplants of any program in the country in 2019. This speaks to the program’s heightened commitment to take on the most complex cases and explore creative ways to find donor kidneys.

Among the program’s most challenging cases were two heart/kidney transplants and one liver/kidney transplant. In addition, a teenage girl with congenital heart disease who had been turned away by other top-ranking programs obtained an evaluation, dialysis and, ultimately, a kidney at Cincinnati Children’s. Two more children whose antibodies prohibited kidney matches with more than 80% of the population received donor kidneys and are doing well.

“Compared to their condition prior to kidney transplant, nearly all of these patients are thriving,” says David K. Hooper MD, MS, medical director of Cincinnati Children’s Kidney Transplantation Program.

The program treats children with multiple comorbid conditions, congenital abnormalities and bodies as small as 9 kg. Their fetal care program allows for in utero interventions followed by neonatal intermittent renal replacement therapy using aquapheresis as a bridge to other forms of dialysis and transplant.

“The real secret is our willingness to collaborate across disciplines, to put our minds together and come up with solutions to problems that people previously didn’t think were solvable,” Hooper says.

Multiple teams with a breadth of expertise and experience come together in the same room to plan and coordinate medical and surgical management before, during and after transplant surgery.

The dedicated transplant team’s success is complemented by a growing Living Kidney Donor Program, propelled by generous people willing to donate their kidneys.

“With children on waiting lists for one to three years, we are working aggressively to expand donor options,” Hooper says, citing as examples videos and promotional efforts to educate people about living donations. Cincinnati Children’s now accepts altruistic donors willing to donate to anyone, as well as directed donors. The program is also cultivating “living donor heroes” to pursue potential living donors. The program works hard to develop a relationship and establish trust with donors, providing follow-up at six, 12 and 24 months after surgery.

This past year, a family’s Facebook plea for a kidney for Northern Kentucky preschooler Caleb Robbins was answered by a young mom from Alabama. Caleb was born with Eagle Barrett syndrome and had lived all of his young life on dialysis. Following successful surgeries at Cincinnati Children’s, he and his donor are both doing well.

Other strategies to identify donors include working with the United Network for Organ Sharing and National Kidney Registry. Additionally, “for patients who are hard to transplant due to sensitization or other factors, we are developing the capability to accept otherwise good organs from donors who previously would not be considered, such as hepatitis C-positive donors,” Hooper says. He explains that hepatitis C is a disease that can be managed effectively, and accepting a donor kidney with hepatitis C may be a better option for survival than an indefinite wait.

“By expanding donor options and developing interdisciplinary capability to transplant complex patients, we are making transplantation available for patients who otherwise would not receive one,” Hooper concludes.

Cincinnati Children’s is the first lab in the nation to provide.

The test can be requisitioned for both clinical and research use nationwide.