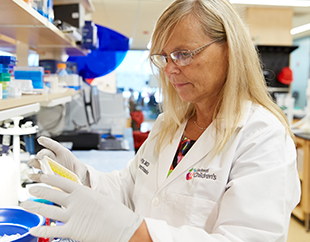 The Nephrology Clinical Laboratory at Cincinnati Children’s is the nation’s first lab providing rapid turnaround of a new renin assay that can identify patients who are likely to respond to angiotensin II infusion therapy, according to Stuart Goldstein, MD, FAAP, FASN, FNKF, director of the Center for Acute Care Nephrology at Cincinnati Children’s.

Angiotensin II is a vasopressor that is proven to raise blood pressure with no increase in overall adverse events. It is most likely to benefit patients who are angiotensin deficient.

The drug was developed by La Jolla Pharmaceuticals and cleared by the Food and Drug Administration (FDA) in 2019 for patients with septic shock or distributive shock.

Goldstein says there are no readily available clinical assays for identifying patients who have insufficient angiotensin II. However, elevated renin levels have been shown to be a good surrogate for this assessment, a fact confirmed in the study “Renin and Survival in Patients Given Angiotensin II for Catecholamine-Resistant Vasodilatory Shock,” recently published in the American Journal of Respiratory and Critical Care Medicine in July 2020.

The study also “closed the physiologic loop,” Goldstein says, by demonstrating that in patients who had high renin levels and received angiotensin II therapy, renin levels came down.

The value of using renin levels in determining angiotensin II insufficiency had been suggested previously in a post-hoc analysis of the ATHOS-III study (New England Journal of Medicine, August 2017). 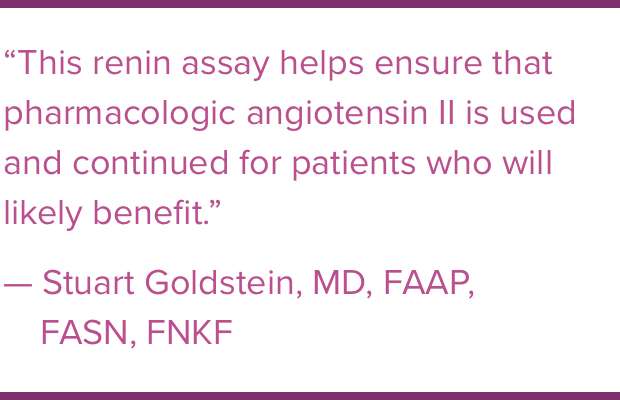 Previously, the only way to detect renin levels was to use a five-day-turnaround test that provided an indirect measure. Goldstein worked with Prasad Devarajan, MD, director of the Division of Nephrology and Hypertension and former director of the Nephrology Clinical Lab at Cincinnati Children’s, to develop and validate the rapid-turnaround assay, which provides a direct measure of renin concentration. The lab processes the assay within 24 hours of receiving it.

“An intensivist could submit the plasma sample, initiate angiotensin II infusion therapy while waiting for the results, and make a decision about continuing therapy when the results are available,” Goldstein says. “This renin assay helps ensure that pharmacologic angiotensin II is used and continued for patients who will likely benefit.”

To order a test, physicians can complete a requisition form or call the Nephrology Clinical Lab at 513-636-4530.

The test can be requisitioned for both clinical and research use nationwide.