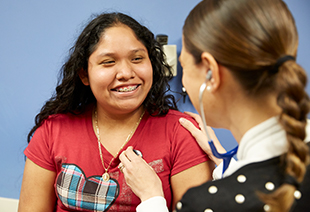 Before Sarah Orkin, MD, started kindergarten, her family moved from a lower-income neighborhood to one with better schools, more greenspace and readily accessible grocery stores. Looking back, she’s convinced that the move changed the trajectory of her life. Clinical experiences during her residency and fellowship deepened Orkin’s awareness of how a person’s neighborhood affects their overall well-being. Now, as a pediatric gastroenterologist and advanced nutrition fellow at Cincinnati Children’s, she is focusing her research efforts on the correlation between socioeconomic status and gastrointestinal disease.

In March 2020, Orkin was the first author of the first pediatric study to evaluate associations between social determinants of health and non-alcoholic fatty liver disease (NAFLD) and between community-level deprivation and liver disease severity. The study, published in the Journal of Pediatric Gastroenterology and Nutrition, included 878 patients under the age of 21 who were seen at the Cincinnati Children’s Steatohepatitis Center for histologically confirmed or presumed NAFLD between April 2009 and July 30, 2018.

The researchers used the Community Deprivation Index (CDI) to generate a standardized, composite score for each patient based on their neighborhood’s metrics of poverty, income, education, public assistance, housing and insurance status. The CDI, which was pioneered by Cole Brokamp, PhD, Division of Biostatistics at Cincinnati Children’s, uses census tract data to reflect the breadth and range of deprivation present in specific neighborhoods. The CDI is available for every census tract in the United States, and researchers at Cincinnati Children’s and other institutions are using it to understand the social and environmental conditions in which health and disease occur.

While the NAFLD study did not demonstrate independent associations between community deprivation and liver disease severity, it did suggest that NAFLD is widely distributed across the spectrum of socioeconomic deprivation. The researchers also noted that a higher CDI score may be correlated with earlier onset of liver disease. 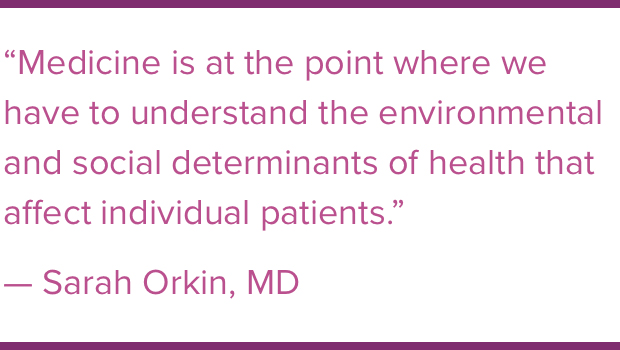 “Even though the study didn’t yield the results we expected, it did underscore some of the challenges of quantifying variables that drive disease processes and outcomes,” Orkin says. “Medicine is at the point where we have to understand the environmental and social determinants of health that affect individual patients. It’s messy, and the more you delve into the data, the more variables you see. This kind of research is important — kids are presenting with NAFLD at a younger and younger age, and we need to target therapies and utilize healthcare resources wisely to stratify patients by risk and decide who needs close follow-up and early interventions.”

Orkin has been with Cincinnati Children’s for six years, first as a general pediatrics resident and then as a clinical fellow in gastroenterology, hepatology and nutrition. She joined the GI Division as an instructor of pediatrics with a focus on clinical and academic nutrition. Orkin sees children with digestive diseases in a weekly clinic, a role that involves patient care and clinical research responsibilities. Her research and focus on nutrition are supported by a prestigious award from the North American Society for Pediatric Gastroenterology, Hepatology & Nutrition (NASPGHAN) Foundation.

A major focus of Orkin’s work as a junior faculty member will be studying how food insecurity and other environmental triggers may be drivers of liver disease. The project is funded in part by a pilot and feasibility grant from the Digestive Health Center (DHC) at Cincinnati Children’s. The DHC supports the research goals of faculty from 19 divisions in the Cincinnati Children’s Department of Pediatrics and eight departments at the University of Cincinnati College of Medicine. Since 2007, the program has distributed $2.43 million among 53 junior investigators, who subsequently attracted $74.3 million in extramural grant funding.

A Novel Dashboard to Predict Optimal Dosing for IBD