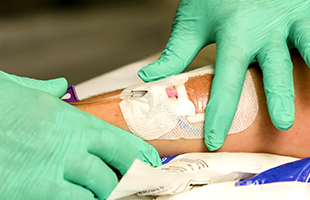 Intravenous bisphosphonate (BP) therapy is generally safe and effective for increasing bone mineral density in children with pediatric osteoporosis, according to a Cincinnati Children’s study published in the journal Bone in 2019. The seven-year retrospective chart review titled “Outcomes Following Intravenous Bisphosphonate Infusion in Pediatric Patients” revealed that side effects occurred in only 7 percent of all infusions, and were mild and easily treated.

“Previously, we were using adult data to consider side effects and determine safety of BP treatment for children,” says co-author Halley Wasserman, MD, Division of Endocrinology at Cincinnati Children’s. “This study gave us a better understanding of the low treatment risks for children weighed against potential benefits of improving bone mineral density.”

Wasserman encourages physicians to consider use of IV BP as a compassionate care treatment, supported by this new data. “Our treatment isn’t curing the underlying condition, but may mitigate the risk of uncomfortable fractures and improve quality of life. While a healthy respect for the drug class is reasonable, physicians shouldn’t have undue concern about the many side effects listed on BP packaging inserts, as most are not being reported in children.”

Documentation of increased lumbar spine bone density Z-scores following initiation of IV BP provided evidence that the treatment is effective for bone health. Further research, Wasserman says, is required on a national, multisite level to determine the degree to which IV BP can reduce fractures in pediatric patients.

Impact of IV BP on Three Types of Pediatric Osteoporosis 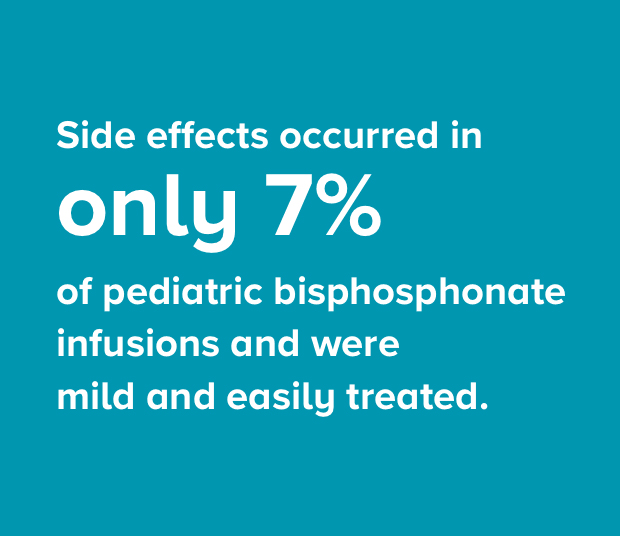 The study looked at 123 patients receiving 942 infusions. Patients were divided into groups: 1) primary (genetic) osteoporosis, 2) secondary osteoporosis due to disorders such as spinal muscular atrophy, cerebral palsy and Duchenne muscular dystrophy, and 3) glucocorticoid-induced osteoporosis. The patients, all under age 21, were followed an average 3.8 years.

Side effects were more likely to occur with the first infusion (27 percent) especially in those children with secondary osteoporosis, an expected finding given the co-morbidities and more medically fragile condition of this group. The most common side effects were flu-like symptoms including fever, body aches, increased heart rate and increased respiratory rate. These were treated with acetaminophen and ibuprofen.

The other common side effects were a decrease in blood levels of calcium and sometimes phosphorous, which were addressed with supplements.

“If a child’s other health conditions are well controlled and the child is not at high risk for one of the more commonly occurring side effects, we are trying outpatient infusions after the first infusion – partly because of COVID-19,” Wasserman says. “In some cases, we are using home health nurses to administer the every-six-month infusions, to minimize the exposure risk of patients onto the medical campus.”

Fat Cell Research Could Lead to Therapies for Metabolic Disease