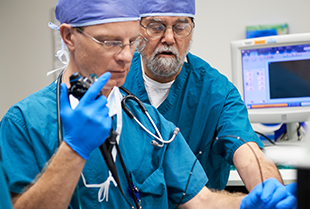 From its development in the late 1800s through the 1970s, bronchoscopy instrumentation went largely unchanged. The scope’s hollow, metal tube (reminiscent of a pea-shooter) created space for instruments to be passed through. Its primary use in children was for removing inhaled objects. But in the early 1970s, new developments included a telescope for use with the rigid bronchoscope and, soon after, fiber optic instruments. Of course, at 6.5 mm diameter, the first flexible instrument was used in children only 13 years and older, “and then only if they were big for their age,” notes Robert E. Wood, MD, PhD, director of Cincinnati Children’s Pulmonary Bronchoscopy Program.

Wood, then at NIH, gained experience with the flexible bronchoscope on adolescent and young adult patients with cystic fibrosis (CF), and with adults at the National Heart, Lung, and Blood Institute. In 1975, when Wood was at Cleveland’s Rainbow Babies and Children’s Hospital, Olympus developed a 3.5 mm diameter flexible bronchoscope. It had no suction channel and physicians couldn’t pass instruments through it. “You couldn't do anything but look, and if you got mucus on the end, that was tough,” says Wood, who nevertheless realized its potential. He placed Teflon tubing alongside it, making it possible to perform useful bronchoscopies on children as young as 18 months.

Wood approached Olympus, asking the company to develop a pediatric-sized flexible bronchoscope. The company had previously assumed the only indication for the instrument could be lung cancer. Within a few years, Olympus asked Wood to test a prototype.

“Suddenly, I was doing clinical procedures in children and seeing things no human being had ever been able to see before," remembers Wood. In 1980, when Olympus put its flexible pediatric bronchoscope on the market, “Nobody knew how to use it—among the pediatric community anyway.” This made Wood uniquely qualified to train others.

What began with training two physician friends grew by word of mouth, and for Wood established a formal training course; 60 physicians attended. Those physicians told their colleagues, and today Wood still offers the course each year. It has been held in the U.S., Switzerland and Spain, with attendance by 2,300 physicians from more than 85 countries.

“Every year, I think it might be the last year, and every year more people want to come,” says Wood.

The four-day training course is a comprehensive introduction to the anatomy, physiology and pathology of the airways, using lecture, video labs and hands-on laboratories where students learn to drive the scope themselves. Offering the training has given Wood “a way of influencing the care of children around the planet.” He adds, “I’m now seeing people who are in practice that have been trained by people I trained. I call them my academic grandchildren.” Roughly two-thirds of pediatric pulmonary fellows trained in U.S. centers in recent years have attended Wood’s course. Cincinnati Children’s Pulmonary Division performs over two-thousand flexible bronchoscopies each year—more than any other pediatric hospital.

The network aims to design, test, pilot, and implement new ways to improve health and quality of life for people living with cystic fibrosis.

The multiphase approach reduced asthma-related hospitalizations and ED visits by 42 percent over the course of four years.