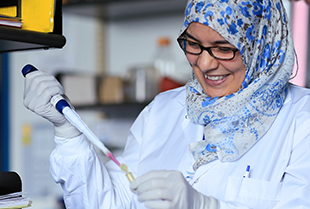 Cystic Fibrosis (CF) is both the most lethal and most common rare genetic disease in the Caucasian population that physicians and researchers are working to treat today. As serious as CF is, it is just as complex, with over 2,000 mutations described.

There’s no single treatment for CF. Some patients present with gastrointestinal (GI) symptoms, others with lung function difficulties. Determining the best line of treatment for patients with rare mutations is further complicated by the fact that known treatment regimens for CF can be incredibly expensive—Kalydeco®, for example, can cost nearly $300,000 per year. This creates a situation in which a child with serious illness may need specialized treatment, but the cost of a trial to determine efficacy is a serious burden on families.

In work made possible through funding from the CF Foundation and NIH, thus far, the Cystic Fibrosis Research Center has researched treatments for over 60 patients, nearly 20 of whom are CF patients. Successes include one patient with extremely rare mutations (G542X/ R74W, V201, and D1270M). “We assumed that this patient would not respond to anything,” notes Anjaparavanda Naren, PhD, director of the Cystic Fibrosis Research Center. But looking at the function of this patient's organoids and testing various drugs in the lab, Kalydeco—unexpectedly, in this case—showed a terrific response. "We were blown away," says Naren. Now, the patient has seen resolved GI symptoms and improved lung function. “When it responds in the test tube and in the patient, that is what we mean by personalized medicine.”

While there are three FDA-approved pharmaceutical drugs for people with CFTR mutations, Naren’s lab is also able to develop assays to see if other FDA-approved drugs can increase CFTR function. If a large enough population is found to be responsive to other medications, Naren’s lab will be able to move forward with preclinical trials.

Naren's lab is additionally working to develop patient-specific chips: "lung on a chip," "gut on a chip" and "pancreas on a chip." On a few-centimeters-square chip created by a bioengineer, researchers can grow patient-derived airway epithelial cells from one side of the chip and smooth muscle cells from the other, and have cyclical vacuums on site to give a lung-like stretch, for example, to replicate patient’s organ function in the lab for testing purposes.

All these efforts are dedicated to answering a single question: “Can we make the patient better?” Naren asks. In the case of rare genetic disease, Naren’s lab drills that basic question of medical research down to each individual patient.

The multiphase approach reduced asthma-related hospitalizations and ED visits by 42 percent over the course of four years.

The network aims to design, test, pilot, and implement new ways to improve health and quality of life for people living with cystic fibrosis.