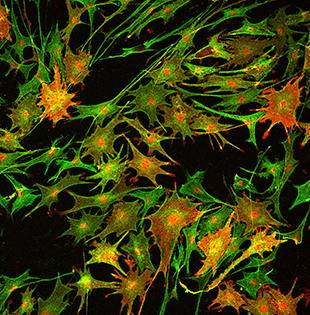 Scientists at Cincinnati Children’s are exploring a new molecular therapy that could one day help people who are suffering from peripheral nerve damage. The experimental therapy, reported in Nature Medicine (Feb. 12, 2018), restored nerve insulation, improved limb function and resulted in less observable discomfort in mice with injured sciatic nerves.

Peripheral nerve damage occurs when the myelin sheath does not fully regenerate after a nerve injury occurs. This results in long-term disabilities and persistent neuropathic pain; no effective therapies are available at this time.

Genes that control myelin sheath production are subject to epigenetic regulation, an external modification that can turn genes "on" or "off". In the study, an international team of investigators performed small-molecule epigenetic screening targeting the enzyme HDAC3 (histone deacetylase 3). HDAC3 checks the production of myelin coating by Schwann cells, which form the myelin sheath around the nerves. After peripheral nerve injury occurs, however, HDAC3 initiates epigenetic changes to chromosomes and gene regulation that excessively restrict myelin regeneration. This results in nerve insulation that is too thin or not totally formed, which blocks or slows signals between the spinal cord, extremities and organs.

Researchers carefully timed their targeted treatments when inhibiting HDAC3, treating the mouse models of nerve injury only during a critical phase of nerve regeneration. The study showed that blocking HDAC3 for too long allows myelin to overgrow and cause excessively thick insulation.  Overdosing it also can lead to functional problems in extremities, according to study data.

Now that the prospective therapy has been successfully tested in mice, researchers are exploring additional research in animal models that more closely mimic the repair of injured peripheral nerves in people. They are further examining some demyelinating diseases that affect the central nervous system, such as multiple sclerosis. If results are positive, Lu says researchers could pursue possible Phase I clinical trials in patients having deficient myelin in their peripheral and central nervous systems.

Image caption: This image from a paper in Nature Medicine shows how inhibiting an enzyme called HDAC3 in mice increases the expansion of Schwann cells (green). Schwann cells form a protective insulating layer called the myelin sheath around the nerves. Blocking HDAC3 increases the production of myelin proteins, shown in red. Scientists from Cincinnati Children’s tested an experimental molecular therapy in the mice that restored nerve insulation and improved limb function following nerve injury in the developing kidney*

Taking Proton Therapy Research to the Next Level