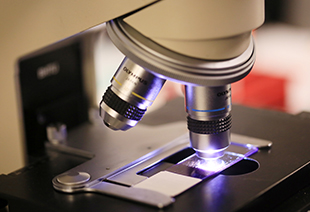 In a paper published in Endocrinology in 2021, Nakamura and colleagues from Cincinnati Children’s, University of Cincinnati College of Medicine and Children’s Hospital Los Angeles reveal how Ago2 in the liver regulates oxidative metabolism in peroxisome proliferator-activated receptor α (PPARα) in a murine model.

“PPARα is very well known for its beneficial effects on fatty liver disease,” Nakamura says. “Our new findings show that liver-specific Ago2 usually suppresses PPARα expression and activation. After vertical sleeve gastrectomy bariatric surgery, however, Ago2 itself is suppressed. Without the influence of Ago2, PPARα is reactivated again to improve glucose and lipid metabolism.”

The study demonstrated for the first time the significant role of hepatic Ago2 in the regulation of PPARα expression and PPARα-mediated mitochondrial oxidation. It confirmed that Ago2 contributes to hyperglycemia in obesity, but its effects are diminished after bariatric surgery.

“In a mouse model, bariatric surgery suppresses Ago2, and we’re still investigating why,” Nakamura says. 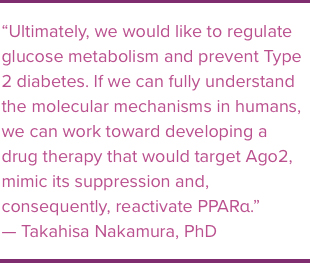 In a previous study published in Nature Communications in 2018, Nakamura and fellow researchers had confirmed that Ago2 controls the silencing of RNA in cells, which causes metabolism to slow and inhibits the liver’s ability to process a high-fat diet.

It further showed that a deficiency of Ago2 in the livers of mice enhanced mitochondrial oxidation and alleviated obesity-associated pathophysiology.

Having established the connections between Ago2 and PPARα in mice, Nakamura is now studying human pluripotent stem cells in the laboratory to determine if Ago2 suppression will improve glucose metabolism in a human model.

“Ultimately, we would like to regulate glucose metabolism and prevent Type 2 diabetes. If we can fully understand the molecular mechanisms in humans, we can work toward developing a drug therapy that would target Ago2, mimic its suppression and, consequently, reactivate PPARα.”