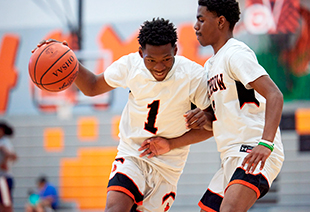 The idea for the JUPITER study grew out of a retrospective study published by Cincinnati Children’s in 2015, which found about a 34% recurrence rate after nonoperative treatment of a first-time patellofemoral dislocation. The study further suggested some people with significant risk factors for patellar instability would benefit from surgery at the time of the first dislocation.

These findings called into question the current standard of care to use nonoperative treatment for patients with a first patellar dislocation unless a bone is broken in the knee joint, according to Shital N. Parikh, MD, FACS, principal investigator and co-director of the Cincinnati Children’s Orthopaedic Sports Center.

“There’s enough evidence in the last decade that this is not the best approach. The JUPITER study is helping us predict what factors will influence which patients will do well with and without surgery,” Parikh says. In addition, the study hopes to provide treatment guidelines for a third group of patients who have a first dislocation and persistent problems related to the knee cap, but no second dislocation.

Researchers are collecting data from enrolled patients and using advanced statistical methods to prepare algorithms predicting when surgery will help prevent recurring episodes of dislocation. Enrollment for the study will close in December 2020, and researchers will follow study participants for the next two years.

Some dislocations occur from contact injuries, but most do not. Significant risk factors for recurrence after a first dislocation include:

Patients in Parikh’s previous study showed that people with all four factors had a predicted risk of recurrent instability of 88%. These high-risk patients would likely benefit from early surgical intervention, Parikh says.

Young people, women and those with a family history of patellar instability all have a higher risk of patellar dislocation, he adds.

For those who require surgery, the JUPITER study is examining which patients would do best with a medial patellofemoral ligament (MPFL) reconstruction and who would benefit from a more complex surgical procedure to reconstruct the knee anatomy.

“This is the largest prospective study anywhere on patellar instability to date,” Parikh says. He is confident it will produce a predictive model that will point to an optimal treatment strategy for first-time and recurrent patellar dislocations.

Trauma surgeon one of few in country to perform this highly complex surgery.