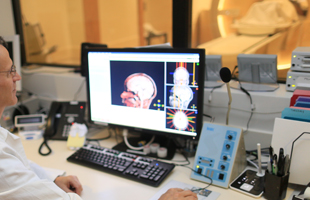 Four in every 10 very premature babies born before 32 weeks gestation develop motor, learning or behavioral problems as they grow. Unfortunately signs of these often do not show up right away. Many children are not diagnosed until they are 2–5 years old. The research of neonatologist Nehal Parikh, DO, MS, aims to find ways to make those diagnoses earlier, soon after birth.

Work in Parikh’s laboratory is focused on finding new approaches to diagnosing, predicting and preventing neurodevelopmental disabilities such as cerebral palsy (CP), learning difficulties, autism and other behavioral issues that are a result of prematurity.

Parikh led a study recently published in Pediatric Neurology that may lead to earlier diagnosis of cerebral palsy. This condition is typically diagnosed starting at 18–22 months of age when functional symptoms start to show up. “By that time, the spasticity that sets in with CP becomes permanent,” says Parikh. “If we can make a diagnosis before then, there is the potential to ward off the irreversible damage CP does in those early years of life.”

His team developed diffusion MRI methods to identify white matter abnormalities of the brain at term-corrected age in premature infants. When examining abnormalities in children who were later diagnosed with cerebral palsy, their methods accurately classified 95 percent of the infants in the cohort. “This is a significant advance over our current ability to diagnose these kids. Currently the best we can do is 70–80 percent accuracy,” Parikh says. They are working on a larger study involving more patients to validate the results.

In Search of Early Warning Signs

Parikh’s team is also leading an early prediction study funded by the National Institutes of Health to use special brain imaging and analysis to try to identify some of the developmental problems known to occur in very preterm babies. It is the largest and first population-based study of its kind in the United States. They have enrolled 400 babies and will be following them out to 3 years of age.

Blazing Trails in the Genetics of Preterm Births

Set to open in late 2021, the new building will be specially designed to optimize care for developing infants.