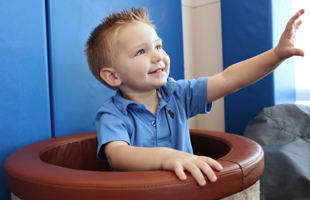 Physicians and researchers haven’t historically known the cause of contractures in children with brachial plexus birth injury (BPBI) or cerebral palsy (CP)—until now. Groundbreaking research at Cincinnati Children’s has uncovered not only the root cause of these contractures, but also how to potentially prevent them.

Researchers in the lab of pediatric hand surgeon Roger Cornwall, MD, discovered that these contractures are related to impaired longitudinal muscle growth, and that medication might be the answer to stop them.

What Leads to Childhood Paralysis?

Both conditions initially cause muscle weakness in children. But it is the secondary loss of flexibility, or contractures, that limits joint motion in kids and becomes a primary driver of physical disability. These contractures in childhood lead to progressive deformity and dislocation of joints.

The majority of interventions these children must undergo—both rehabilitative and surgical—are aimed at treating the effects of these contractures. However, the existing therapies cannot actually cure the contractures without first knowing how they are caused. The pioneering research in Cornwall’s lab has changed that.

Cornwall and his fellow researchers, using a specially developed mouse model of BPBI, found that the contractures are caused when the longitudinal growth of paralyzed muscles is impaired. This occurs because of loss of normal nerve input during a critical window of muscle development during the neonatal period.

Using their mouse model, they also discovered that longitudinal muscle growth is regulated by a balance between the synthesis and breakdown of muscle proteins, a balance that is disrupted in paralyzed muscle, which was previously unknown to scientists. With this new knowledge, they delivered a drug targeting the molecular mechanism driving the protein imbalance in the paralyzed muscle. The result? They prevented the contractures from occurring.

“This discovery provides a proof of concept that something we have always considered to be a purely mechanical consequence of limb immobility is actually a biological problem with a medical, rather than physical, solution,” Cornwall says.

This work led to a National Institutes of Health Research Project Grant (R01) for the lab—the first R01 for the Division of Orthopaedics, and the first-ever given for pediatric brachial plexus research. It also resulted in a grant from the Pediatric Orthopaedic Society of North America (POSNA) and won Best Basic Science Paper at the 2019 POSNA Annual Meeting.

This is a notable milestone in a long journey for Cornwall’s team. While it’s several years away, their hope is to eventually get a drug to clinical trials. “It is conceivable that treatment early on with a medication could prevent these contractures, which would eliminate the need for the majority of surgeries done for these children,” Cornwall says.

This research also sheds light on how muscle grows, and it expands the implications of the team’s work to a wide array of childhood muscle problems.

Cornwall is excited about what lies on the horizon for those who could be affected by this research. “I’ve always believed it was possible to prevent these muscle contractures,” he says. “Now we know that it is possible.”

Experts from 15 institutions around the world are establishing consensus on indications for surgery and building guidelines to standardize care for patients with CP.

The multidisciplinary effort established shared goals for discharge and has decreased length of stay for kids after spine surgery.