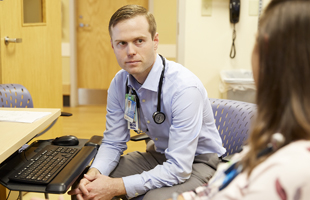 An innovative quality improvement (QI) training initiative at Cincinnati Children’s is transforming the way pediatric endocrinology fellows think about and approach QI projects. It’s all part of an effort to ensure the QI training fellows receive is as meaningful and useful as possible.

Quality improvement training is an educational priority for the Accreditation Council for Graduate Medical Education, which requires all pediatric training programs to integrate QI initiatives into their curriculum. The Division of Pediatric Endocrinology has long provided QI training for fellows, but has lacked a standardized, structured approach. In other words, there was room for improvement.

“Previously, our fellows typically worked on a QI project or received QI training independently,” says pediatric endocrinologist Jacob Redel, MD. “We developed a multilevel, collaborative approach in which five pediatric endocrinology fellows worked on the same QI project but were assigned unique roles. At the time, I was a third-year fellow, and I was asked to be the coach since I had previous QI training. One of the first-year fellows was designated team leader due to his strong interest in quality improvement, and three other fellows served as team members. A faculty mentor with extensive QI training and experience was the project mentor.”

The five fellows chose a QI project together, which focused on improving glycemic control while preserving quality of life in children with type 1 diabetes. They began meeting in early 2018 while also participating in a formal QI curriculum offered through the institution. Each took ownership of individual tasks within the project. For example, some members were responsible for tracking measures, and others tested specific interventions. The leader oversaw the group’s progress with guidance from the coach and the faculty mentor.

The flexible project design allowed the fellows to build on their existing QI skills and interests:

The structured phase of the type 1 diabetes QI project ended in mid-2018, but team members continue to work toward the project’s goals in a less formal way. Redel, who is now on the faculty, says the multilevel approach has become part of every endocrinology fellow’s QI training experience at Cincinnati Children’s.

Outcomes from the multilevel QI training initiative appeared in Medical Education in November 2019.

Gastric bypass or medical management for kids with T2D?