Unlocking the Mysteries of Nephrogenesis 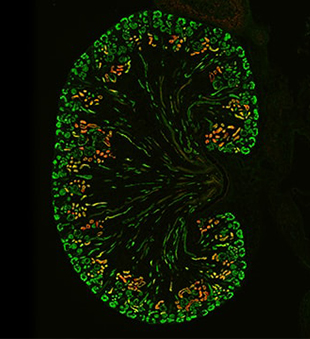 Joo-Seop Park, PhD, a developmental biologist in the Division of Pediatric Urology at Cincinnati Children’s, discusses his lab’s recent discoveries about nephrogenesis and the curiosity that drives him to better understand the human kidney.

What is the goal of your research?

Humans are born with a finite number of nephrons, and low nephron endowment is associated with a risk of hypertension and end-stage kidney disease. My lab’s long-term goal is to devise a way to increase nephron endowment during fetal development and generate functional nephrons that could potentially treat kidney disease. Right now, we are investigating many different aspects of nephron development and segmentation. This is essential, not only for finding a way to build functional nephrons in vitro, but also for promoting nephron regeneration after kidney injury.

Your lab recently published two studies on Notch signaling. What can you tell us about them?

The two studies, by lead author Eunah Chung, PhD, and others, made significant discoveries about the role of Notch signaling in the early stages of nephron development. In the first study (Chung et al., 2016), we found that turning off the gene Six2 is essential for nephron progenitor cells to undergo differentiation and development into a nephron. We discovered that Notch signaling is responsible for turning off Six2, because when we removed Notch genes in undifferentiated nephron progenitor cells, it caused constitutive expression of Six2 and blockage of nephron formation.

Now that we have established that Notch signaling is required for the formation of all nephron segments, we are investigating other signaling pathways that potentially regulate mammalian nephron segmentation. For example, we are developing a study to investigate how Wnt and retinoic acid signaling pathways regulate nephron endowment and segmentation. Another proposed study will use the gene Hnf4a as an entry point to study the formation of proximal tubules.

Where does your motivation to study nephrogenesis come from?

We are driven by a desire to cure kidney disease, but first we must understand how a healthy kidney is made during development. Through collaboration with other labs at Cincinnati Children’s and with researchers at other institutions, we are getting closer to our goal. The more we learn, the more we realize how much more there is to discover.

Both Notch signaling studies appeared in the journal Development.