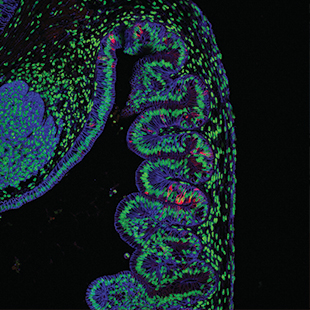 What Can Brown (Adipose Tissue) Do For You?

The pathogenic accumulation of adipose tissue in obesity contributes to many maladies, including insulin resistance, type 2 diabetes and cardiovascular disease. Juan Sanchez-Gurmaches, PhD, an endocrinology researcher at Cincinnati Children’s, is studying the developmental and metabolic clues that control the adipocyte stem cells functions to find new therapeutic targets against adipocyte-centered diseases. 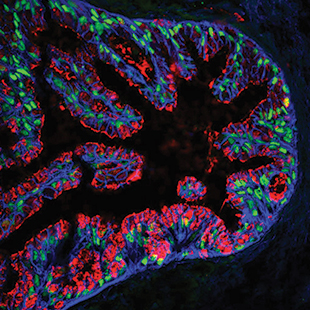 “We recently found that the metabolic pathway called de novo lipogenesis, which synthesizes fatty acids from other substrates like glucose, is the most up-regulated pathway in the activation of brown adipose tissue in human physiology-relevant conditions,” Sanchez-Gurmaches says. “Using mouse genetics, we uncovered a mechanism in which the insulin signaling pathway member AKT2 is required for lipid storage in brown adipocytes, but dispensable for thermogenesis, through activating the transcription factor ChREBP. Interestingly, this mechanism is conserved in human brown adipose tissue.”

This study, published in the Jan. 9, 2018, issue of Cell Metabolism, highlights new mechanisms of the metabolic adaptation of brown adipose tissue under human-relevant conditions, and may open new doors to future therapeutic interventions against obesity.

Obesity develops when energy intake chronically exceeds total energy expenditure. The liver is the major organ for energy consumption, with normal protein biosynthesis representing the most energy-consuming process. In obesity, this normal liver-driven energy consumption robustly declines, and protein biosynthesis deteriorates dramatically. The drastic interference by the obese condition leads to an imbalance of energy sources as extra fat accumulates in the liver, resulting in obesity-associated pathophysiology. Therefore, understanding and defining the molecular mechanism(s) by which hepatic protein biosynthesis is suppressed in obesity could provide a novel therapeutic approach that alters energy balance in obesity and modulates the pathogenesis of associated sequelae.

This study highlights that Argonaute 2-mediated RNA silencing is a key regulator of glucose and lipid metabolism during the pathogenesis of obesity. “There may be important translational implications for our findings, especially in the design of therapeutic interventions, to target modulation of a spectrum of Argonaute 2-dependent events, in chronic metabolic disorders such as diabetes, fatty liver disease, and other obesity-associated sequelae,” says the study’s senior author, Takahisa Nakamura, PhD, an expert of metabolic disease research at Cincinnati Children’s.

Vivian Hwa, PhD, believes liver organoids may help unlock the mysteries of severe growth failure in children. For the past decade, her research lab has been studying the molecular basis of these rare disorders, with their most recent findings published in Nature Communications, 2018. In 2017, she began collaborating with Takanori Takebe, MD, a stem cell biologist at Cincinnati Children’s, whose lab is creating increasingly sophisticated organoids of the liver. The miniature, three-dimensional organs are created from human induced pluripotent stem cells (hPSCs) and perform many functions of the liver.

“Organoid research will allow us to push the boundaries of what’s possible in the study of growth abnormalities and associated co-morbidities, such as immune deficiency and insulin resistance,” says Hwa. “Our lab has been creating functional assays to help interpret genomic variants associated with growth disorders, but it is incredibly difficult to culture human hepatocytes. Liver organoids are a great substitute for human liver tissue. We hope to use them to create models that help us better understand the components of the growth axis, study different genetic mutations, find new markers for growth hormone resistance and someday even test individualized molecular therapy.”

These are early days for Hwa’s work with liver organoids, but she is enthusiastic about the possibilities. “Children with short stature have a limited window of time to find an effective therapy,” she says. “Organoid-based research could help us accelerate the process of scientific discovery and develop good alternatives for patients who don’t respond to growth factors.”

A First for PAPP-A2 Deficiency Research

In 2015, researchers at Cincinnati Children’s discovered two genetic mutations responsible for a novel growth disorder called PAPP-A2 deficiency. Just a few months later, they turned their attention to developing a treatment protocol. Results from the first year of the experimental therapy were published in the Journal of Clinical Endocrinology and Metabolism in December 2017.

PAPP-A2 deficiency results in higher circulating levels of total insulin-like growth factor (IGF) but low levels of free insulin-like growth factor 1 (IGF-1), and is characterized by short stature, insulin resistance and below-average bone mineral density. So far, only five people in the world have been diagnosed with PAPP-A2 deficiency. They include three siblings in New York and two siblings in Spain; two of the New York siblings received drug therapy through the Cincinnati Children’s study.

The experimental treatment protocol used standard dosages of recombinant human insulin-like growth factor 1 (rhIGF-1), which is used to treat another IGF-1 deficiency disorder called Laron syndrome. One sibling discontinued treatment after developing pseudo-tumor cerebri, a known side effect of rhIGF-1. But the other experienced an increase in height velocity, resolution of insulin resistance and an increase in total-body bone mineral density.

Based on a patient’s blood work, PAPP-A2 deficiency could easily be misdiagnosed with short stature, says Catalina Cabrera Salcedo, MD, the study’s first author. She adds it is likely that many people have the condition and are not aware of it. “A few years ago, we didn’t know the genetic mutation existed, so it is exciting to see even modest results from this treatment protocol,” she adds.

Philippe Backeljauw, MD, encourages patients and their families to feel empowered to seek surveillance and treatment they need.