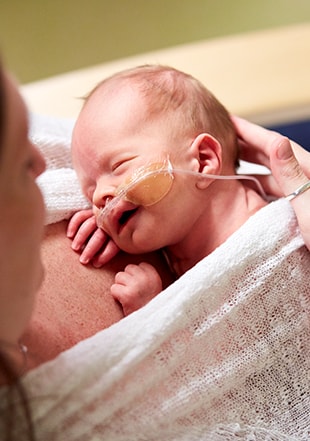 Early identification of problems in the lungs of neonates is vital to their survival, yet has been extremely difficult until now. Jason Woods, PhD, and his team at the Center for Pulmonary Imaging Research have found a safe way to accurately image lung structure and function in the youngest and most fragile patients.

The promising technique used by Woods and colleagues employs magnetic resonance imaging (MRI), which has historically been problematic for studying the tiny lung structures and tissue of neonates. The researchers’ adaptation provides extremely accurate images while sparing babies the risk of sedation, anesthesia or radiation.

“We have had no non-invasive, non-ionizing ways of imaging the lungs for neonates that we have high confidence in,” says Woods. “This method is breaking new ground in pediatrics.”

This method is breaking new ground in pediatrics.

Woods and his team use an MRI scanner specifically designed for newborns, housed within Cincinnati Children’s NICU. They capture MR images of lung abnormalities using an “ultrashort echotime (UTE)” MRI. This non-ionizing technology allows doctors to visualize, safely and with a high degree of accuracy, even the most subtle structural abnormalities in the lung, often before functional deficits would be found in pulmonary function tests.

Woods is a physicist by training, but found early in his career that he enjoyed using his training to improve medical approaches. He and his team have worked on improving pediatric imaging since he arrived at Cincinnati Children’s nearly five years ago.

“One problem with imaging these small infants is that respiration is very shallow. The method we’ve adopted uses the MR signal itself to do respiratory gating –acquiring or reconstructing images from the instance of peak inspiration to peak expiration in breathing. So we can see volume differences between those two stages of respiration.”

The breakthroughs will help doctors understand how treatments are affecting underlying lung structure, which will accelerate getting the best care to babies early on, says Woods. And the method can be used without risk to the child.

Another technique Woods has pioneered that is a game-changer for pediatric lung disease is the use of hyperpolarized (HP) gases. These are safe, inhaled gases that allow researchers to visualize real-time ventilation in patients with lung abnormalities. The gases (3He or 129Xe) have high-spin magnetism, so they are easily seen on the MRI, are not radioactive, and in a span of 10 to 15 seconds can obtain high-resolution images of the entire lung. Woods says this will be a tremendous help in understanding small abnormalities in regional ventilation – something not possible with traditional pulmonary function tests.

In an ongoing study, Woods is combining UTE and 129Xe MRI to try to understand how small structural abnormalities relate to functional deficits. The hope is that this will allow doctors to tailor future treatments to individual patients.

“A major reason for pursuing and refining these imaging methods is that it allows us to determine the best treatment for these fragile patients,” he says. “We can image, describe and quantify the underlying pathologies in the lungs of these tiniest patients, get a radiologic picture of normality and abnormality in the lung and begin to form treatment plans that have imaging at their center for initial evaluation and follow-up.”

Technology may be one of the best ways to help kids with high-risk asthma, according to a Cincinnati Children’s pilot study that yielded surprisingly positive results.

Vitamin D Deficiency Not a Cause of Asthma

Researchers have found that vitamin D deficiency does not contribute to the frequency or severity of pediatric asthma, and vitamin D supplementation doesn’t alleviate its symptoms.